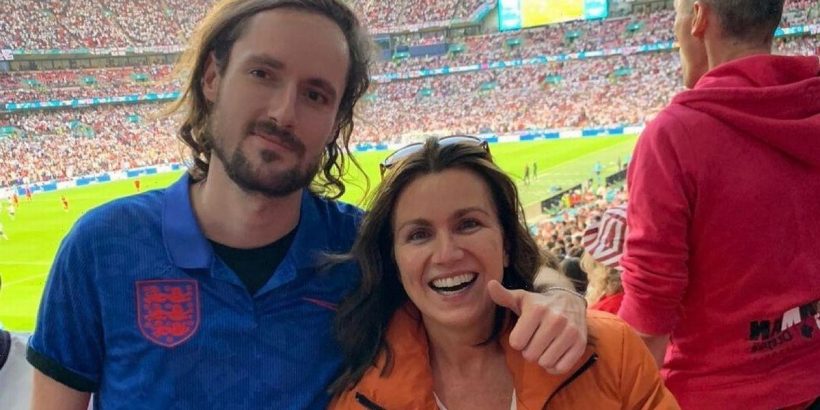 Susanna Reid was spotted at Wednesday's England v Denmark semifinals in a packed crowd without her mask on.

The Good Morning Britain host even got cosy with Piers Morgan's son Spencer who wrapped his arm around his dad's former onscreen wife to mark the occasion.

However, the TV star, 50, has since come under fire as critics called her out online after she said that she "will carry on wearing" her face covering even after Freedom Day on July 19.

During Thursday's ITV breakfast show, Susanna was shown at the match wearing a surgical style mask.

The Instagram account of Spencer Morgan painted a slightly different picture which saw the newsreader in a more relaxed setting.

Spencer Morgan, 28, was seemingly elated to see his father's co-star and took to social media to share the footage with his followers, describing Susanna as an "old friend" and a "queen".

Among the 60,000 fans who packed out Wembley stadium on Wednesday, somehow Susanna and Spencer met by chance at the game and he couldn't wait to share the moment with his internet chums.

Along with the cosy image of the pair together, he penned: "Not only did we bring it on the verge of home, but I also bumped into an old friend.

"She is a queen and we're in it together."

The warm embrace between the pair and the fact neither were wearing masks in the snap didn't seem to sit well with some online users.

One person penned beneath the post: "And the queen is always going on about social distancing and masks."

Another person asked: "Where's the mask Susanna? Like the photo you just showed on GMB."

A third added: "Oh Susanna is mask-less without social distancing after banging on about it with Dr Hilary every morning."

"Why was she pretending she was wearing a mask at the game on GMB?" said a fourth.

According to guidelines on UEFA's website, attendees do not have to wear a face covering when they are seated in view of the pitch, so Susanna was well within her right to relax a little.

Attendees must also provide proof of a negative Lateral Flow Test, proof of full vaccination or proof of natural immunity.

In the past, Susanna has even refused a hug from her co-star Adil Ray – even though the gesture was completely legal at the time – urging him to save his hugs for "more important people".

In the live segment Adil was shown approaching his on-screen partner with his arms open wide, before adding: "Let me just, come on! I haven't seen you in such a long time!"

Susanna said awkwardly: "What did Dr Hilary say? I am still in the mood for a virtual hug!"

Dr Hilary interjected: "Lots of people are still nervous for a hug!"

Later, Susanna explained: "Apologies, I am just protecting you first of all, who knows what I might have, but secondly if we ration our hugs you can hug more important people."

Meanwhile, Piers Morgan had also let his hair down at the football match.

Spencer showcased his dad coming out of "the box" looking rather cheerful.

His eldest born child, uploaded the video which included the caption: "He's had a big one in the box."

Later the former anchorman was mobbed by fans outside the stadium and Spencer was on-hand to capture his father huddling for selfies.

With the clip, Spencer penned: "He loves social distancing."