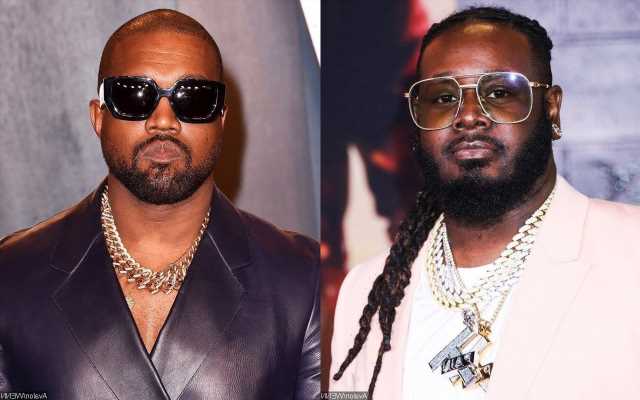 The ‘Bartender’ singer still can’t believe that the Yeezy designer recycled the lines from ‘Danger’ for the latter’s 2010 album ‘My Beautiful Dark Twisted Fantasy’.

AceShowbiz –T-Pain has been left baffled by Kanye West‘s decision to steal his lines. During a recent live stream, the “Bartender” singer said he “couldn’t believe” that Ye recycled the lines from his song “Danger” and then used it for the latter’s 2010 album “My Beautiful Dark Twisted Fantasy” despite calling them “corny.”

T-Pain, who worked with Ye on “Watch the Throne” in 2010, noted that he was also recording his mixtape “prEVOLVEr” at that time. Claiming that he showed the mixtape to Ye, T-Pain shared, “I got a chance to show Kanye my f**king raps. And he’s not like super hip to my raps. He’s not been a fan of mine long enough to know that I actually rap, too.”

“And I get a chance to show him how I rap. It was either ‘Prevolver’ [or] it was one of the Pre mixtapes before I released it,” T-Pain added. “And on one of the songs I said, ‘I got beef like two burgers/ You n***as win slow and I’m smarter than Steve Urkel.’ Now, keep in mind the Winslow family, right. Corny as f**k. I knew it was corny when I said it.”

Once T-Pain played it for Kanye, the “Donda” artist confirmed that it was corny. The estranged husband of Kim Kardashian then allegedly told T-Pain, “Don’t ever say anything ever like that.”

However, T-Pain was surprised that Kanye used the lines for his track “Dark Fantasy”, which was released prior to the former’s mixtape in 2010. “Fresh air, rollin’ down the window/ Too many Urkels on your team, that’s why your wins low,” Ye raps.

“That’s my bar,” the Nappy Boy Entertainment founder argued. “I don’t think he said it better, I don’t think anything happened that his was better than mine… because mine was out.”