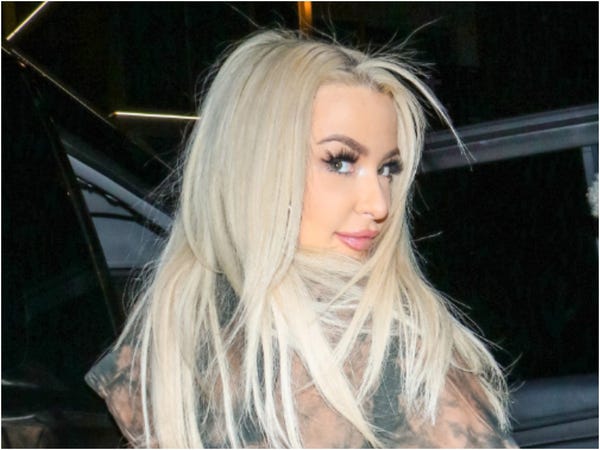 Tana Mongeau was accused of committing election fraud by commentators and news outlets this week after she said she would send a free nude photo to fans who could prove they voted for Joe Biden.

"If u send me proof u voted for Biden I'll send you a nude for free," the 22-year-old YouTuber wrote in a now-deleted tweet, adding a link to her OnlyFans and the hashtag #bootyforbiden.

Mongeau is a mega-famous YouTube star who grew her 5.5 million strong following from her candid, over-the-top storytime videos, and controversies such as her turbulent relationship with fellow YouTuber Jake Paul.

Mongeau followed her tweet up with an update to her Instagram where she posed in her underwear and superimposed Biden's face over hers. She said the game had crashed her OnlyFans page, which she calls "Tana Uncensored."

"Love to see so many ppl who want change as badly as i do," she wrote. "U don't need my ass to know what's right for America so go VOTE! today was fun, ily."

update #bootyforbiden broke tana uncensored. love to see so many ppl who want change as badly as i do. u don’t need my ass to know what’s right for America so go VOTE! today was fun, ily 🇺🇸

However, some commentators and news outlets suggested #bootyforbiden may have broken the law as it could be classed as vote-buying, which is a felony.

Mongeau told Insider she hopes people realized she was being sarcastic.

"Obviously no one needs an explicit photo of me to go vote and make a change in our country," she said. "As much as I love Biden, I am not telling anyone who to vote for."

She said she wished the online stars she was watching at 18 years old had told her to vote "so that things could have been better."

"I think it's very obvious in all of the things that Trump is doing, how terrible it is for our country," she said. "And I want to use my voice in every way possible to make that known and to encourage my young followers to vote."

Mongeau said she's seen the videos and news articles, and thinks "people have a lot of really crazy things to say."

"No, I was not campaigning illegally for votes," she said. "It really was just a funny thing to post, and in every form people sent in they were just being silly and sarcastic back. I'm not out here asking for ballots on OnlyFans, because that would be illegal and weird."

TMZ speculated that Mongeau had her YouTube verification removed because of the incident. This was actually an error that occurred because Mongeau uploaded videos to her account incorrectly. Her verification tick has now returned.

Mongeau shared a tweet by Paper Magazine on Tuesday night and clarified the situation further.

"U don't need my ass to tell u who to vote for," she said. "I lost youtube verification because i accidentally f—ed up uploading in the backend of my acct. it's back now. f— the news lol."