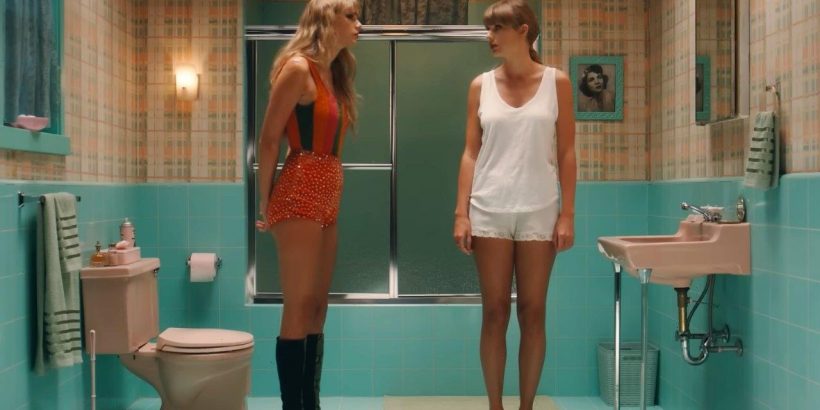 People take issue with a scene in which Taylor steps on a weighing scale and it shows the word ‘Fat’ though some Swifities point out that the singer’s talking about her experiences with body image issues.

AceShowbiz –Taylor Swift‘s new album “Midnights” has received widespread acclaim from critics, but the sentiment wasn’t echoed by those who have watched the visuals for one of its tracks. The singer has landed in hot water for alleged fatphobic message in her music video for “Anti-Hero”, the first single off her tenth studio album.

In “Anti-Hero”, the Grammy Award-winning artist grapples with topics like self-loathing and their fear of being unlovable. The critics particularly took issue with a scene in the clip in which Swift steps on a weighing scale. Instead of her weight, the scale shows the word “Fat” in red capital letters while her doppelganger shakes her head in judgment.

The scene quickly drew criticism, with many claiming that it demonishes and shames fat people. “as an actual fat person genuinely how are we supposed to feel seeing this? Watching a thin person remind the whole world that one of the their biggest fears is being fat. Is looking like me. Demonizing the word fat while never having the experience of living in a fat body? Fatphobic,” one Twitter user reacted.

Some fans came to Swift’s defense, pointing out that the singer was talking about her experiences with eating disorder and body image issues. “If you think any time people with an eating disorder speak about their issues it’s fatphobic you’re facilitating the idea that people shouldn’t talk about it,” a Swiftie claimed.

Another defended the superstar as saying, “Taylor at no point said being a certain size was bad. She didn’t say being fat was a problem. She literally said she views herself as bigger than she clearly is due to her body dismorphia. Regardless of what that scale said she would always see herself as fat…”

However, others argued that eating disorder isn’t an excuse for fatphobia as New York-based eating disorder therapist Shira Rose argued, “Taylor Swift’s music video, where she looks down at the scale where it says ‘fat’, is a s**tty way to describe her body image struggles. Fat people don’t need to have it reiterated yet again that it’s everyone’s worst nightmare to look like us. Having an eating disorder doesn’t excuse fatphobia.”

Someone also accused Swift of sending the wrong message with the music video, “I understand having an eating disorder and body issues. but specifically using the word ‘fat’ in such a derogatory context explicitly sends the message that being fat is a bad thing. it villianizes fatness. i’m disappointed that this is the message taylor swift chose to send.”

Another slammed the problematic scene, “…her having the scale say ‘fat’ is a radical simplification of eating disorders, especially when fat people have EDs too.” One other critic echoed the sentiment, “i don’t deny or diminish anyone’s experience with ED, but I’m truly over seeing complicated, personal, incredibly nuanced issues (body shame, personal failure, self-loathing) get reduced to the word ‘fat’.”

Another person similarly pointed out the problem, “Excusing fatphobia in discussions of EDs overlooks the fact that many fat people struggle with EDs. Fat people with EDs already have a more difficult time accessing supportive care and experience significant invalidation. When we excuse fatphobia, it aggravates this experience.”

“Why do we continue to perpetuate the narrative that fat is the worst possible thing you can be. And that fat is synonymous with lazy, unworthy, disgusting, abhorrent or any other f**king adjective that non-fat folk use to describe how horrendous their bodies are,” someone wrote on Instagram.

Disappointed at Swift, another critic penned, “Taylor Swift has openly talked about how the media accused her of being too fat or too thin. Yet in her Anti-Hero music video she vilifies fatness when she looks down at the scale and it says ‘FAT’. She makes it clear here which body shape SHE thinks is worse.”

Swift has not responded to the backlash over her music video. Meanwhile, her album “Midnights” is eying a big debut on Billboard Hot 200 after it broke the record for most-streamed album in a single day in Spotify history.