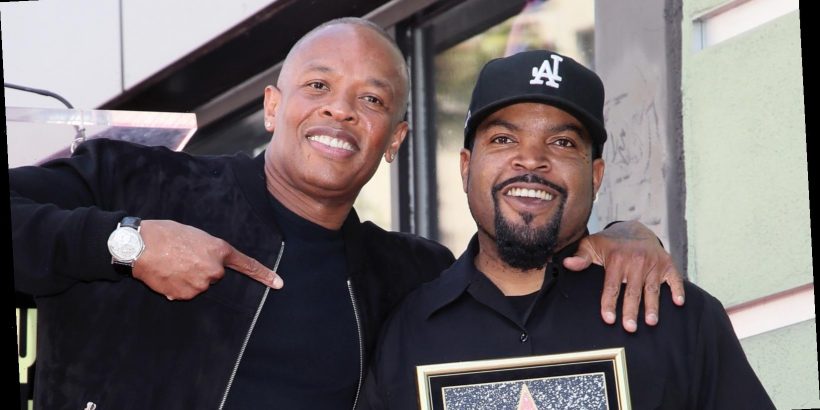 From their days in Compton all the way to today, Dr. Dre and Ice Cube have shared a longstanding friendship. The two started their careers rapping alongside one another in the hip-hop group N.W.A., along with the group’s other members Arabian Prince, DJ Yella, Eazy-E, MC Ren, and Snoop Dogg. They rose to fame for their “gangster rap” and controversial lyrics, but like many musical groups, they were plagued with beef amongst their teammates.

Despite Dre’s and Ice Cube’s tumultuous relationship, the Barbershop actor proved he was a true friend after Dre was hospitalized for a brain aneurysm on Jan. 4, 2021, per TMZ. Following the unfortunate news, Ice Cube took to both Instagram and Twitter to share a photo of the two, writing, “Send your love and prayers to the homie Dr. Dre.”

At the time of this writing, Dre is still in the ICU at Cedars-Sinai Medical Center in Los Angeles, but is in stable condition, per TMZ. He even shared an update on his health via Instagram, assuring his fans “I will be out of the hospital and back home soon.” Keep scrolling for more details about Dre and Ice Cube’s friendship and how the bandmates-turned-enemies-turned-besties eventually reconciled.

Following the success of N.W.A’s debut album Straight Outta Compton, Ice Cube left the group in 1989 after he felt he wasn’t fairly compensated for the work he did on the album, per AllMusic. However, his N.W.A pals didn’t appreciate his pursuit for a solo career and bashed him on several of their tracks. Ice Cube retaliated through rap and infamously slammed the group on his track “No Vaseline,” where he rapped, “You lookin’ like straight bozos / I saw it comin’ that’s why I went solo / Kept on stompin’ / When y’all muthaf***as moved Straight outta Compton / You got jealous when I got my own company / But I’m a man, and ain’t nobody humpin’ me.” He also directly addressed N.W.A.’s song “100 Miles and Runnin” — specifically the lyrics reading, “We started with five, but yo / One couldn’t take it—So now it’s four / Cuz the fifth couldn’t make it.” On his own record, Ice Cube rapped, “I started off with too much cargo / Dropped four n****z and now I’m makin’ all the dough.”

Despite both parties addressing their feud through music, Dr. Dre didn’t appreciate the attention over their rift. After hip-hop show Pump It Up covered their drama, Dre allegedly assaulted the show’s host, Dee Barnes, per Rolling Stone. “People talk all this s**t, but you know, if somebody f***s with me, I’m gonna f*** with them,” Dre explained at the time.

It wasn’t exactly clear to fans how Dr. Dre and Ice Cube eventually reconciled, but, in 1993, Ice Cube made an appearance in Dre’s “Let Me Ride” music video. After that, the frenemies recorded “Natural Born Killaz” together and a few other tracks with the original crew. The pair reunited on stage again after 27 years at Coachella in April 2016.

Addressing their feud once and for all, Ice Cube confirmed his quarrel with Dre began when he left N.W.A over royalty disputes on The Howard Stern Show in 2016. “He was producing a record called ‘Natural Born Killaz’ and he wanted me on it,” he told the radio host (via Entertainment Tonight Canada), explaining Dre’s initial gesture to rekindle their friendship. When the pair made amends in the name of good music, they came back together and never rehashed their old issues. “We just went forward. We’re gonna always be like that. I don’t care if we don’t talk to each other for 10 years, when we see each other, it’s gonna be like yesterday.”

The friends posed next to one another on the cover of Rolling Stone in 2015 for the release of their movie Straight Outta Compton about their iconic careers. Although Dre has remained silent about his reconciliation with Ice Cube, he told the outlet, “I have social anxiety,” adding, “I don’t like being in the spotlight, so I made a f**king weird career choice.” It sounds like these two will be homies through thick and thin.