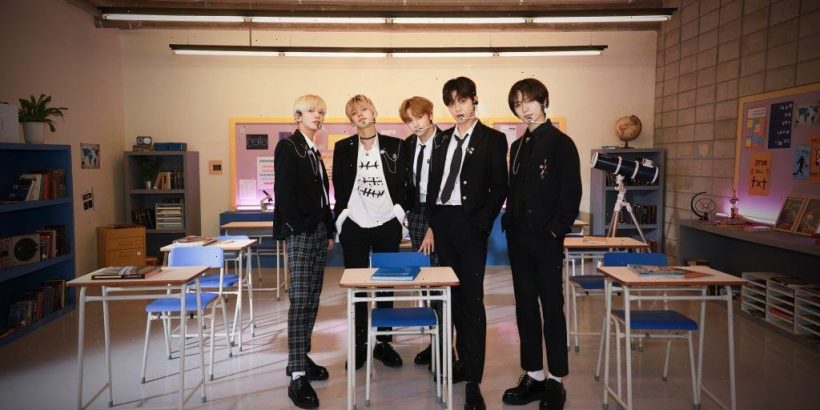 TXT debuted in 2019 with Big Hit Music. The band has five members: Soobin, Yeonjun, Beomgyu, Taehyun, and Huening Kai. Their first album series is known as The Dream Chapter and consists of two EPs and a studio album.

After The Dream Chapter trilogy, TXT released a standalone EP called minisode1: Blue Hour in October 2020. The EP focused on the concept of teenagers navigating mixed emotions brought on by the coronavirus (COVID-19) pandemic.

Big Hit Music announced that TXT would begin their next album series with a teaser trailer on April 29. The teaser was shared on social media and showed the pixelated TXT logo from the minisode1: Blue Hour era transforming into a new TXT logo that represents The Chaos Chapter: FREEZE.

TXT try to avoid being frozen in the concept trailer

With the new concept trailer for The Chaos Chapter: FREEZE, fans get an inkling about the aesthetic and tone of the album. At the start of the trailer, the five members play an arcade game.

A snowball hits Beomgyu and the room begins to fill with ice. Soobin, Yeonjun, Beomgyu, Taehyun, and Huening Kai leave the arcade room and run through the mall as ice is hurled at them.

Before long, the entire mall is covered in ice. Together, the members dance through intense choreography as ice falls around them, symbolizing that they are attempting to battle the ice.

Even with their fight against the ice, the members of TXT become frozen. In a tunnel of light, a figure of a girl is seen and the ice that has trapped the members begins to melt.

There are multiple teasers left for ‘The Chaos Chapter: FREEZE’

There will be two music video teasers for the album’s lead single. The first teaser will be released on May 28 at 11 a.m. EDT, and the second will be shared online on May 29 at 11 a.m. EDT.

TXT will release the music video for the lead single of The Chaos Chapter: FREEZE on May 31 at 5 a.m. EDT.