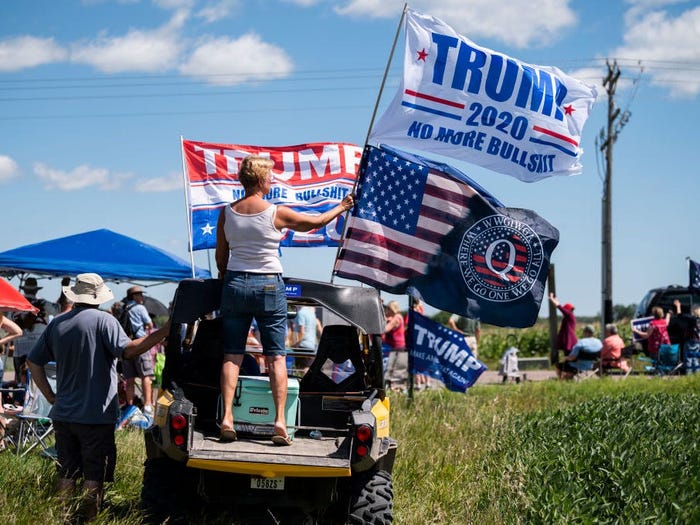 The QAnon conspiracy was born out of the Trump presidency. But the movement, experts warn, may well outlast his time in the White House.

Though President-elect Joe Biden was projected by Insider and Decision Desk HQ as the winner of the election on Friday, with broadcast news networks and other news outlets following suit on Saturday morning, QAnon followers — and Trump — have refused to accept the news.

QAnon is not an organization or group, but rather a vast movement focused on a baseless far-right conspiracy theory that alleges President Donald Trump is fighting a "deep state" cabal of satanic pedophiles.

There are now two women elected to Congress who have espoused the conspiracy theory in the past. The movement has also made its way outside of the US, with international arms thriving in Canada, Germany, France, and other countries.

After Trump's loss, extremism researchers worry about where QAnon will go from here. The movement has become increasingly dangerous as its fringe theories have made their way to mainstream culture and seemingly inspired acts of violence.

"The growth of QAnon has pretty fundamentally changed the entire landscape of American conservatism, and I would say international right-wing politics as well, by completely desensitizing wide swaths of the populace to these conspiracy theories that have taken on a life of their own outside of QAnon itself," Alex Bradley Newhouse, research lead at the Middlebury Institute of International Studies' Center on Terrorism, Extremism, and Counterterrorism, told Insider.

The QAnon community is clinging to Trump as Q remains silent

On platforms like Gab and Parler, where QAnon believers have gathered after being booted from Facebook and Twitter, believers have offered their perspectives on the state of Trump's presidency and the group's future.

The morning after the election, as it became clear the Trump was not a decisive winner, QAnon followers were already anxious. On Parler, a Twitter copycat, one QAnon follower asked: "Now that trump [sic] has lost the election with Michigan Turning Blue, what's the plan now?" Another follower appeared to concede, writing, "Well we tried."

By Friday, when Biden was projected to win the election, it had been days since QAnon believers heard from their messenger, the anonymous Q figure who posts cryptic notes on the fringe-forum 8kun. The last post by Q, early in the morning on Tuesday, included an Abraham Lincoln quote, a link to a YouTube video of the main theme song from the 1992 film "The Last of the Mohicans," and three simple words: "Together we win."

As the week went on and Trump continued making baseless accusations of voter fraud and a "stolen" election, QAnon followers believed him. In the absence of guidance from Q, the conspiracy theorists only had Trump and QAnon influencers to look towards amid the chaos.

By Tuesday, one week after the election, the QAnon hashtag on Parler was mostly populated by posts baselessly alleging that dead voters handed Biden the election, that Michigan's voting system was somehow broken, and that Trump actually won Pennsylvania but Democrats were covering it up.

There is no evidence to support any of those assertions, but Trump has encouraged the notion that the election was rigged and refused to concede.

As Kevin Roose of The New York Times noted on Tuesday, Jeffrey Pedersen, the QAnon influencer who uses the moniker InTheMatrixxx on social media, said in a Friday podcast episode that "We're winning, folks," referring to Trump's reelection. Another QAnon personality known as Shady Grove added, "This is not what you thought winning would look like" and told listeners to "trust" him.

On Gab, a QAnon group with more than 39,000 members continued normal QAnon-related discussion smattered with claims that Trump will win the election. The group appeared to have rapid growth, with its moderator writing on Saturday that the group had grown to roughly 10,000 members by that point.

"We know what is coming, the media pushes and pushes this to the max. All dems finally stop crying and get off there mums nipples after replenishing for 4 years. Then BOOM trump wins," said one user on Tuesday.

In another popular QAnon group, a Gab user said on Tuesday, "We are the power!!! We unite together as one from all over the world and fight for TRUTH and FREEDOM. We are in this together. We are ONE. Nothing can stop us. Don't back down. I love you all. We will have WORLD PEACE."

QAnon, as it exists now, has two variations. The first is a group of the core believers who promote outlandish claims based mostly on political smears, such as the idea that Hillary Clinton drinks the blood of children. The second group is the "Save our Children" camp, who allege kids are being snatched up nationwide and that the US government is complicit in an insidious pedophilia ring.

For the core believers, Trump is viewed as a powerful savior for the country, and his losing the election threatens everything they've come to accept as fact — like the idea that he has more power than nonbelievers understand, and that it's his responsibility to fight the fictional cabal they believe exists.

"QAnon is in a weird place right now. The core of the adherents are, in general, extremely dedicated, devoted people, who have already replaced any sort of objective reality with the reality told to them by Q and Trump," Newhouse said. "That core of true believers is extremely difficult to dissipate or to mitigate."

But beyond that main group, people like wellness and lifestyle influencers, yoga professionals, and other people — particularly women — have adopted and echoed QAnon's messaging. That group isn't necessarily "tied" to Trump and the core QAnon mythology, Newhouse said, but they'll continue to spread their belief system that's based in QAnon's mythology.

QAnon is adaptable and can easily shift beliefs

The internet has been awash with misinformation since the election. Despite Trump's projected loss, the QAnon community has already blamed Democrats and created voter fraud allegations to explain away the projected results. The willingness, so far, to accept conspiracy theories that delegitimize a Biden win could mean the movement has staying power.

Joan Donovan, the research director of the Shorenstein Center on Media, Politics and Public Policy at Harvard University, said that QAnon is so "attuned to breaking news events" that it will survive after Trump leaves office. "It's able to incorporate breaking news events into its own storyline, so no matter what happens to Trump, the theory will adapt and the network will shift," Donovan told Insider.

Donovan said that she suspects many QAnon adherents to take a Trump loss as a vindication of their beliefs in a corrupt government, as misinformation and conspiracy theories about alleged voter fraud continue to circulate.

"I think the version of it that exists now will change, but by design, it is meant to move past this moment," Donovan said.

Newhouse echoed that sentiment, saying that he's "reluctant to say that QAnon is going to dissipate at all" after the election. "I think that there's a chance that their capacity for recruitment will go down, and the core, true believers will have to continue coming up with more creative ideas to attract the sort of 'soft QAnon' crowd, because the central pro-Trump thesis is going to take a hit no matter what if Trump loses," he said.

QAnon's rebrand around 'Save the Children' could help it stick around

First Draft, a nonprofit tracking misinformation online, found in an August analysis that of 3.5 million Facebook users discussing "Save the Children" and "Save Our Children," "the most engaging conversations were happening in Facebook groups and on Instagram accounts related to QAnon," NBC News reported.

While the anti-human-trafficking movement has existed for years, QAnon uses it as a "Trojan horse" to hide in plain sight on platforms that tried to ban the conspiracy theory, Donovan said. While QAnon was able to recruit new members this way, the movement also provided passionate "Save the Children" advocates with more fuel.

"What the QAnon folks have been able to add into this community is a sense of urgency and an explanation for why the topic hasn't been at the forefront of every politician's policy," Donovan said. "That does give a kind of renewed purpose, for people that have been part of that movement to see that kind of energy."

Donovan said it's hard to predict the future of the conspiracy theory, because "we don't really have a lot of examples to draw from about the effects of misinformation at scale."

Not everyone agrees that QAnon will continue to live on.

Steven Hassan, an expert on cults and the founder of the Freedom of Mind Resource Center, which supports survivors of cults, said he believes the movement will likely begin to disintegrate after Biden's win. Hassan interviewed QAnon adherents who told him they'll leave the movement if Trump loses.

In an op-ed for NBC News, Hassan wrote that "once people see that Trump hasn't been re-elected and that there never was a secret pedophile cabal that Trump would be willing or able to break up, they will come to realize that their leader is, in actuality, totally untrustworthy and just using them."

QAnon's central tenet, that a secret cabal of Democrats and celebrities abuses and facilitates the trafficking of children, has seeped into the offline world and has seemingly influenced nearly a dozen alleged crimes, including killings and attempted kidnappings. The FBI said in a 2019 memo that the movement posed a domestic terrorism threat.

It's that potential for real-world violence that worries some experts about its future. Just two days after Election Day, on Thursday night, two men believed to be linked to QAnon were arrested on firearms charges in Philadelphia. QAnon believers were also seen over the weekend protesting the election results alongside other far-right extremists and armed militant groups, including the Proud Boys.

Newhouse, who has studied the overlap of QAnon with other far-right extremist groups, said QAnon has made its way into militant groups like the Oath Keepers and the Proud Boys. This "gradual integration and overlapping of far-right extremist militia groups with QAnon" will likely continue to increase, Newhouse said.

The Proud Boys are a "crypto-fascist extremist organization," according to Samantha Kutner, a Proud Boys researcher whose work has been published by the International Centre for Counter-Terrorism at The Hague. Kutner said that QAnon's overlap with groups like the Proud Boys poses a serious threat.

Proud Boys have been known to march alongside QAnon supporters, Kutner said.

"Their worldview makes them uniquely susceptible to conspiracy theories," Kutner told Insider, which could extend QAnon's lifecycle. "This type of belief system makes the other conspiracy theories more palatable, and then they also utilize QAnon to maximize their visibility." Proud Boys, like QAnon adherents, have been linked to several crimes.