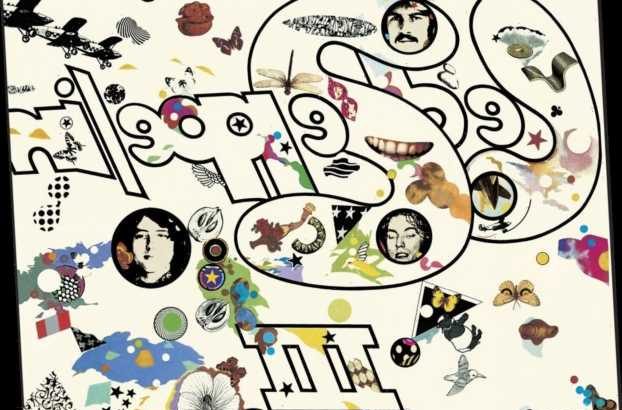 As album covers go, Led Zeppelin got off to a great start. The iconic image of the burning Hindenburg (LZ-129) featured on the band’s ’69 debut set the tone for Zeppelin’s 12-year run. And Zep matched that energy with the cover of late ’69’s Led Zeppelin II (aka the “Brown Bomber”).

If the band invented heavy metal with that second LP (as many have claimed), then the image of World War I fighter pilots (and another burning zeppelin) was a good fit. But everything took a turn with the pop-art collage on the cover and gatefold of Led Zeppelin III (1970).

This time around, record buyers saw zeppelins on the cover, but they weren’t burning. What’s more, they were joined by birds, colorful butterflies, and other fauna on a white background. Was this even the same band?

Looking back on Led Zeppelin III in a 1993 interview, Jimmy Page spoke of his disappointment with the artwork on the sleeve. And Page explained why the group had no choice but to release it as it was.

Speaking with Brad Tolinski of Guitar World in ’93, Page summed up his thoughts on the Led Zeppelin III art succinctly: “A disappointment.” Though Page had described how he wanted the picture wheel to work on the front cover, he didn’t get any status updates from the artist.

By the time the band had finished the record, Page couldn’t wait on the cover any longer. “It got to the point where I had to say, ‘Look, I have got to have this thing,’” Page told Guitar World. “I was not happy with the final result — I thought it looked teeny-bopperish.”

Yet with the album already late as it was, Page and his bandmates couldn’t do much about it. “We were on top of a deadline, so of course there was no way to make any radical changes,” Page recalled. “There are some silly bits — little chunks of corn and nonsense like that.”

Since he’d hired the artist (from whom he’d bought artwork previously), Page took personal responsibility for the cover. But the four-pronged album sleeve remains one of the most interesting of Zeppelin’s eight studio LPs.

Though Page didn’t like the result for a Zeppelin album, he couldn’t have been too surprised by what he got from Zacron, the artist. In the ’60s, the London art world had called him “the King of Collage.” And he delivered a wonderfully detailed collage for the III front cover and gatefold.

An opening in the cover allows you to spin the cardboard wheel inside and choose which band member’s photo you see in the circle below the “l” in Zeppelin. For example, when you slide singer Robert Plant’s photo into the circle, another picture of Plant fills the hole at the top of the cover.

If you choose one of the other band members, you see different photos in the various spaces. Meanwhile, the vinyl disc held its own surprises in the run-out grooves. On either side, buyers found Rabelais quotes (via Aleister Crowley). Side 1 featured “So Mote Be It”; on side 2, you found “Do What Thou Wilt.”