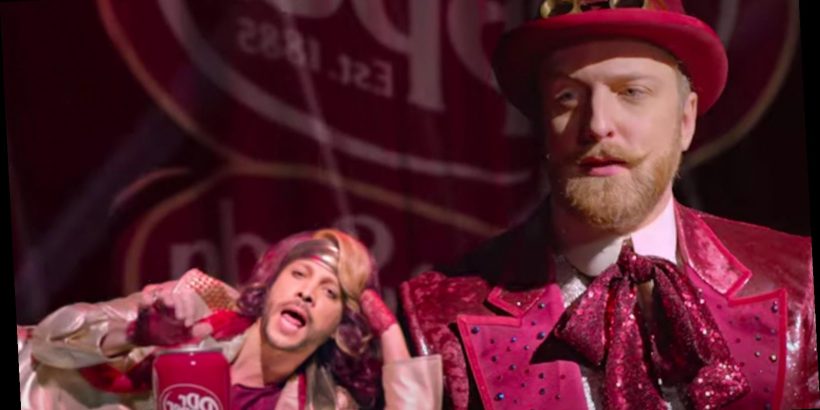 To quote a classic Saturday Night Live skit, we have a fever, and the only prescription is more of this Dr Pepper commercial. The hilarious musical ad, which premiered in June 2020, features two rockers (including the Lil Sweet character) singing a tune about the brand’s new creamy soda. The piano-driven ballad is “‘Sister Christian’ inspired,'” per ISpotTV, which is a 1983 tune by the band Night Ranger (and it’s definitely stuck in our heads). The ’80s hair-band influence comes through in its two on-screen rockers, who shred on various instruments, croon about having “two flavors making music on your lips,” and nearly get tackled by a crazed fan on stage. It’s fun! And we’re not hyping a soda commercial for nothing; viewers are clearly on board with the carbonated classic rock anthem too. “This better be on the top 100 billboard,” one commenter wrote on YouTube. “This song has been stuck in my head for the past week and I’m not even mad about it,” wrote another.

Well, there’s another reason you may enjoy, or at least raise an eyebrow, at the stadium-ready “Dr Pepper & Cream Soda” commercial. That’s because you’ve seen its stars before — especially one of them. Bubble on down to discover the surprising stars of Dr Pepper’s “delicious duet.”

Here's why you're Idol-izing this Dr Pepper commercial

Why do the stars of “Dr Pepper & Cream Soda: A Delicious Duet” seem familiar? While one is actor Will Green from TV’s The Middle, the other is … American Idol’s Justin Guarini!

Back in Season 1 of Idol in 2002, the curly-haired Justin Guarini impressed audiences and sung his way to the finals alongside Kelly Clarkson. Of course, it ended up being Kelly Clarkson’s moment, or “Moment Like This,” and the star won the first season of the reality show. That said, Guarini has done pretty well for himself post-Idol. Clearly pals (or something more, as Guarini once told E! News), the two went on to star in the musical vacation flick From Justin to Kelly. While that film was a critical flop, Guarini has rebounded. Now in his 40s, he has had roles in a number of Broadway musicals, including Wicked, Romeo and Juliet, and American Idiot (per Broadway World). In 2015, he began his stint as the groovy, Prince-inspired Lil Sweet in Dr Pepper commercials.

“The funny thing is, that type of humor and that type of behavior, I do it around the house all day every day. I remember saying during the shoot, ‘I can’t believe you guys are paying me to do this,’ because that’s the kind of stuff I do for my kids and my wife,” Guarini told Entertainment Weekly. Joining the pantheon of commercial greats like Flo from Progressive? Not bad, Justin Guarini!