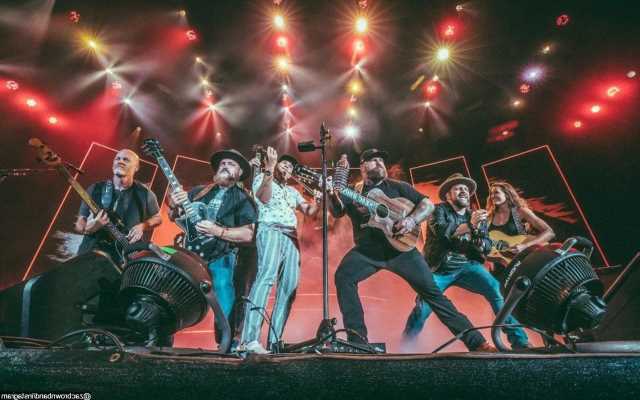 In a statement shared on the band’s social media page, Zac Brown says that he is ‘deeply disappointed’ for canceling four shows that are scheduled in Clarkston, Burgettstown, Syracuse and Saratoga Springs.

AceShowbiz –Zac Brown Band is forced to cancel four of their tour dates after Zac Brown tested positive for COVID-19. In a statement released on their Instagram official page, the country band announced that they canceled shows in Clarkston, Burgettstown, Syracuse and Saratoga Springs.

“To all our fans, I have made the very difficult decision to pause Zac Brown Band’s ‘The Comeback Tour’,” the lead singer wrote in the statement posted on Tuesday, September 28. “Despite taking precautions, I’ve tested positive for COVID-19. I am deeply disappointed this has happened, as touring is our life and performing live for our fans is the best part of our job.”

Zac went on noting that he wants “to take every precaution to put the health and safety of our fans and crew first.” The 43-year-old singer then continued, “We will resume the tour as soon as I have finished the CDC-mandated quarantine and it is safe for our band members and crew to do so.”

“I am grateful to our fans for understanding this decision, as well as everyone on the front lines who can’t stay at home because their work is essential,” Zac expressed his gratitude. The frontman of the band then said that “nothing’s better than the comeback,” adding, “I believe we can all overcome this together. As soon as we can, we’ll see you back out on the road again.”

The shows currently scheduled in Clarkston, Michigan on September 30, Burgettstown, Pennsylvania on October 1, Syracuse, New York on October 2 and Saratoga Springs, New York on October 3 have all been canceled. In the comments section of the post, Zac shared that refunds can be given out for the canceled shows.

“The Comeback Tour” is named after the band’s upcoming album “The Comeback”, which will be out on October 15. The tour kicked off in August with a show in New Jersey and will conclude with a performance at Nashville’s Bridgestone Arena on October 17.

Zac himself previously said that the new album “celebrates our collective resilience as a community.” The “Knee Deep” singer explained, “This music is about standing together and rediscovering our roots and what makes us human.” He further elaborated, “We feel incredibly blessed to be back out on the road again, sharing these new songs with our fans. The only good thing about getting knocked down is ‘The Comeback’ when it comes back around.”