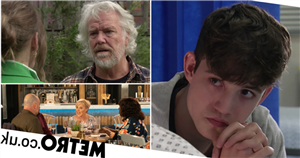 There are shocks and surprises in store in Coronation Street next week, as a murder has solved and a secret friendship is revealed.

It all becomes too much for Bridget, who runs out to the garden in tears. Stu follows her out, hoping to comfort her as he talks about how angry he was over being in jail for a crime he did not commit, but he receives a shock when Bridget makes a huge revelation.

Nick Tilsley (Ben Price), meanwhile, shows a shocked Leanne Battersby (Jane Danson) that they have both received prison visiting orders from Harvey Gaskell (Will Mellor) in the post.

They agree not to respond, and Nick rips them up. Leanne, however, begins to waver, admitting to Nick that she won’t be able to rest until she finds out what Harvey wants.

Seeing that Aggie is puzzled by his and Sally’s flirtatious behaviour, Tim sends her a text, but he soon comes to realise that he’s actually sent the message to Sally!