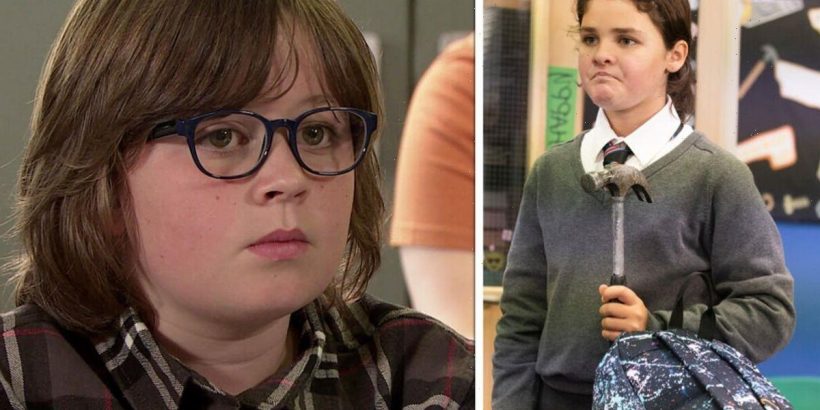 Coronation Street: Bernie gets stitched up by Fern

Fiz Stape has been panicking over the release of a book about her murderous ex John Stape, who is also Hope’s father. In upcoming episodes on Coronation Street, she’ll fear her daughter could do something dangerous when she takes a hammer into school. Elsewhere on the cobbles, Ken Barlow reunites with an old flame. Will he spark up a romance and betray Wendy Crozier? Express.co.uk has all you need to know from Weatherfield.

In coming episodes, Tyrone Dobbs (Alan Halsall) opens the door to the outhouse only to discover the books about John have vanished.

Fiz (Jennie McAlpine) and Tyrone confront Hope (Isabel Flanagan) over the missing books and she makes out she lobbed them in a bin on Tile Street.

Hope calls to see Sam (Jude Riordan) and tells him she made £75 flogging her Dad’s book.

She later joins in a group chat entitled ‘Legacy of Evil’.

She types a message to her classmates informing them that tomorrow she’s planning a special tribute to John Stape.

Ahead of the reading, she takes a hammer from a tool box and heads into school.

When two Year 11 girls call her a “nut job” Hope takes out the hammer and heads towards them. How far will she go?

Ken Barlow comes face to face with a former lover

Nigel confides in Ken that he’s going to approach an actress friend with a view to replacing Mary.

Ken, Brian and Wendy tentatively suggest to Mary she should tone down her performance but she won’t be deterred.

Ken and Brian suggest to Nigel he asks his actress friend to give Mary some coaching rather than replace her as she’d be terribly upset.

In the community centre, Nigel introduces his actress friend to Brian, Ken and Mary.

Ken’s surprised to realise it’s Martha, his ex. How will they react when they come face to face?

Nick Tilsley (Ben Price) and Sam meet up with Karis, the facilitator and head into the prison. In the prison visiting room, Sam interrogates Harvey (Will Mellor).

Harvey concedes he intended to murder Leanne before revealing his Mum died when he was 14.

Sam reckons it must have caused him to go off the rails and asks Harvey some awkward questions about his Mum and Harvey strides out.

In his prison cell, Harvey is clearly rattled by Sam’s visit and picking up his most recent letter, he sets about reading his questions.

The next day, Nick takes a call from Karis telling him Harvey wants Sam to visit him again tomorrow.