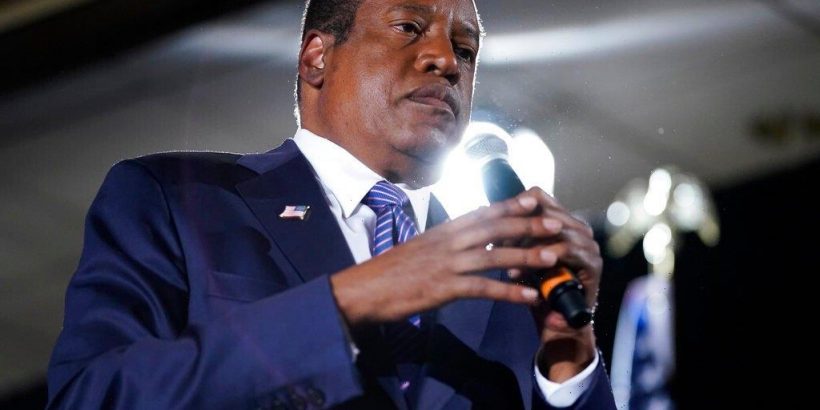 ANALYSIS: Larry Elder is on his way to nearly matching Arnold Schwarzenegger’s share of the vote in the last California recall election, but that’s just about where comparisons to 2003 end.

In fact, in a post-mortem on Wednesday, some Republicans are even blaming Elder for the shellacking that the pro-recall side took, handing Governor Gavin Newsom ample material to work with given Elder’s long history in the world of AM radio bombast.

Ron Nehring, the former chairman of the California Republican Party, said at a Sacramento Press Club event that Elder was “a life preserver thrown to Gavin Newsom.” Just as ballots were being mailed to all of the state’s registered voters, Newsom’s side was seizing on Elder’s past statements, from opposition to a minimum wage to comments about women.

Compared to Schwarzenegger, whose entry into the recall race gave fuel to efforts to oust Governor Gray Davis, “you saw the opposite happen in this case,” Nehring said.

The problem only got worse on Monday, when Elder’s side posted a website claiming election shenanigans and asking users to petition the legislature to launch an investigation of the results. The problem was that votes hadn’t even been counted, and Tuesday was a crucial day of in-person voting as the election concluded.

Nehring blasted the tactic as one that perhaps suppressed the pro-recall vote. When Elder’s campaign manager Jeff Corless said that the website was simply a portal for voters to report irregularities, Nehring responded, “That is bullsh*t.”

So how did Elder become the candidate for Republicans, drawing in not just rightward media but a big share of the party’s traditional donor base in the state?

When he got into the race, Elder quickly amassed small and large dollar contributions and generated countless appearances on conservative media and rose to the top of the polls among the 40+ Newsom alternatives. That included the more moderate but far less known San Diego Mayor Kevin Faulconer, who already was eyeing the 2022 race. Elder’s draw was undoubtedly that he was a well-known figure, a celebrity on the right, but his challenge was that he was largely unknown outside of those circles.

Corless said that they will be dissecting the results to see how Elder did in areas where he campaigned, including heavily Democratic areas where he drew large crowds.

He said that Elder “wasn’t out there campaigning on a Trump message,” but “was able to talk about things in ways that were substantive.”

Yet the results so far don’t suggest that Elder was able to draw much in the way of crossover votes, even harder for a Republican in California than it was for Schwarzenegger in 2003. Rob Stutzman, who worked on Schwarzenegger’s campaign that year, told CNN earlier this week, “Elder is just trying to be the most popular Republican in a state where it doesn’t mean anything to be the most popular Republican.”

Meanwhile, Elder’s move to pre-emptively cast doubt on the integrity of the election mirrored Trump’s own claims of mail-in fraud before the 2020 vote, and the former president himself only exacerbated the doubts by issuing a series of statements in advance of the vote. By Monday night, Newsom’s closing night election rally was almost entirely tied to the idea that Elder was a Trump clone, as President Joe Biden put it.

Tim Miller, political analyst and former political director of Republican Voters Against Trump, wrote in The Bulwark this week that the problem is the base strategy, i.e. believing that soaking up small (and large) dollar donations and social media attention translates into votes. “These days, all politics is national. If a local candidate or party wants an outcome different from their state’s partisan lean, they need to be intentional about separating themselves from the national narrative rather than playing into it,” he wrote. It’s not just on the right: Witness the hopes that surrounded Democratic candidates in South Carolina and Kentucky, drawing huge sums of out of state cash.

Elder, Miller told Deadline, “tapped into their anger and grievance and rage, and people in the party went along with it.”

There certainly was discontent among the electorate, and Newsom may have been in real trouble at one point, according to some polls in early August. But an issue that Elder and other candidates treated as a negative — Newsom’s support of Covid restrictions and vaccine requirements, coupled with his infamous visit to the restaurant French Laundry — may actually have been a positive for the governor, according to Edison Research exit polling.

“I think there was a sense that they could make this all about Gavin and French Laundry and whatever and school openings,” Miller said. “That is not reality in our politics anymore. The tribalism nature is too strong for that to crossover. You need to give them something more besides hypocrisy.”

Elder has said that he’s not done with the political stage, telling supporters on Tuesday night that “we may have lost the battle, but we are going to win the war.” He now may be the most popular figure in the state Republican party, but in a true blue state, he’ll need a new battle plan to break out of the bubble.