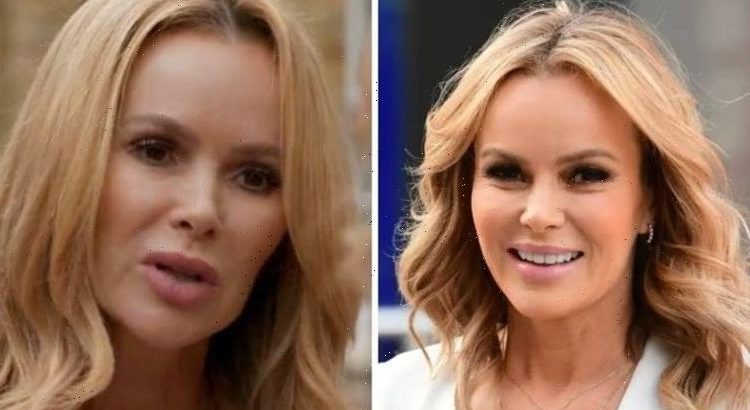 Former Britain’s Got Talent judge Amanda Holden is seen looking comfortable in her new role in the new series of Channel 5’s Neighbours. Amanda will guest star in a London-based soap storyline and will play the character Harriet, the British aunt of the show’s Harlow. After she announced her involvement in the series on her Twitter and Instagram account, fans were wildly excited to see her debut.

In a jam-packed trailer posted on Channel 5’s Twitter, Amanda’s character, who was glammed up, received a visit from Harlow, played by Jason Donovan’s daughter Jemma, 21.

Harlow is set to jet to the UK, where she will meet Amanda’s character Harriet, in the hope of figuring out a mystery about her late mother, Prue, who was previously played by Denise Van Outen.

In the trailer for the series, scenes revealed Amanda’s opening words are: “Ramsay Street, what are you going to do?” while asking her Australian niece.

Speaking on an old-style telephone and sat with the script in her hand, Amanda simply said: “Oh hello operator, Ramsay Street, please.”

Commenting on the video and the news of her arrival, fans were delighted at her arrival in the series and hoped to see her character throughout.

@Rebecca_J6 wrote: “You look adorable! Can’t wait to see it, love pink on you!”

@AmandaFandom commented: “YES! Amazing, I cannot wait to see you in this, you’re going to smash it!”

@KayJay added: “Oh yes, Holden! Tell me something she can’t do, so just keeps on surprising fans with her talent.”

@YessJess_00 echoed: “Ooooh, I am so excited for this! I really hope this isn’t a one-off, and we’ll be seeing more of you.”

“If I’d told my 12/13-year-old self I would one day appear in Neighbours, I’d have never believed it!”

Amanda also touched on the fact many members of the public thought her and co-star Jemma Donovan were related in real life.

“So many people were beeping in their cars, and people walking past assumed that Jemma was my real daughter because we look quite similar.

“I can’t wait to continue the journey of my character Harriet. Like most people in the UK who were around in the late Eighties and early Nineties, I grew up watching Neighbours every single day.

“I was glued to our TV for the wedding of Kylie (Minogue) and Jason (Donovan) while cursing Mrs Mangel (Vivian Gray).

“And praying that Mike and Jane (Guy Pearce and Jane Harries) would eventually get together! Not to mention all the other greats over the years.”

The recent series of Neighbours ended on a major cliff-hanger, with Terese Willis (Rebekah Elmaloglou) hanging from the Lassiter roof.

Kyle Canning (Chris Milligan) and Roxy Willis (Zima Anderson) wedding is due to take place in the early weeks of the year, with the couple determined to enjoy their day after Kyle’s cancer diagnosis.

Neighbours first big stunt of the year will also see a deadly storm hit Erinsborough on a significant day for some of the local residents.

Neighbours airs weekdays at 1:45PM and 6PM on Channel 5.