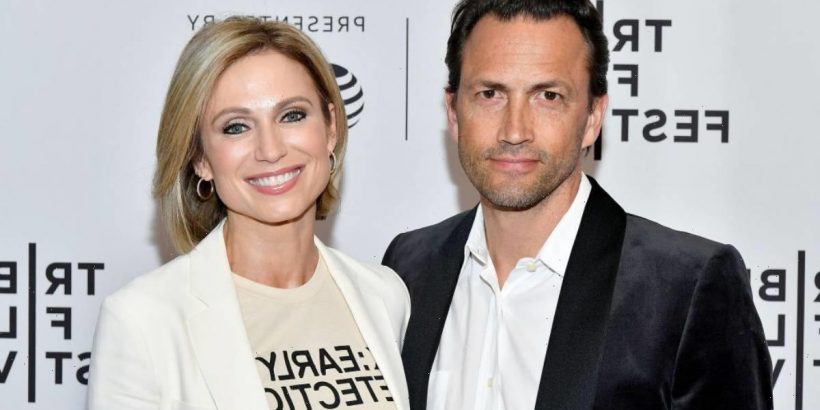 Amy Robach got into the festive spirit when she wore the most fabulous bright, red dress for an appearance her viewers weren’t expecting.

The star showed off her fit physique as she left Good Morning America for an interview on The View alongside her husband, Andrew Shue.

Amy shared photos on Instagram and she looked lovely in the bright ensemble which was perfect for the holidays.

The TV host posted a snapshot from the festive set and wrote: “One of the best views we’ve had in a while!!! Love you @sarahaines @theviewabc.”

Fans rushed to comment that they loved seeing Amy and Andrew on the show together and that they also adored her outfit.

MORE: Amy Robach shares exceptionally rare photo with both daughters – and they’re so grown up

“What a great picture!!! Absolutely beautiful,” wrote one, while a second added: “Greatest legs of all time.”

Amy and Andrew appeared on The View

Their appearance was surprising to many who didn’t realize she was stepping away from her show to be on The View.

“I didn’t know you were going to be on the show,” commented a viewer and others stated the same thing admitting they were sad they missed their interview.

MORE: Amy Robach’s Thanksgiving destination is cozier than you could possibly imagine – see inside the luxury home

MORE: Amy Robach shares glimpse at onboard gym during uneasy workout in Antarctica

Amy only recently returned from Texas where she was supporting her co-host, Michael Strahan during his mission to space.

Fans were delighted she jetted to be there for her fellow TV host and by the looks of her vacation photos, Amy was enjoying it too.

Amy and Andrew have been promoting their book Better Together

In a photo she shared with her social media followers, Amy was basking in the sunshine away from the cold climate of New York.

She wrote: “Hey @michaelstrahan I can’t wait to watch you wow us all and head out of this world… and they say waiting is the hardest part, but I’m not complaining!”

Michael did wow his fans with his mission which went ahead on 11 December as he rocketed into space with Blue Origin.

He said it was an unbelievable adventure and one which he would love to do again.