Warning: This review contains spoilers from Thursday’s And Just Like That… premiere.

As a longtime Sex and the City fan — I even watch the butchered and bleeped reruns they air on E! — I was a little skeptical when HBO Max’s revival And Just Like That… was first announced. The movies weren’t great, the ladies are in their mid-50s now and Kim Cattrall isn’t even involved. So it’s a relief to inform you that And Just Like That… — the first two episodes are now streaming; I’ve seen the first four — does a decent job of bringing Sex and the City into the modern era, infusing it with new blood and finding fresh layers within its classic characters. There are a few sticking points here and there that will annoy fans (like me), but the mere fact that this series isn’t Sex and the City 2-level awful, even with its core foursome fractured, is a victory to celebrate.

And Just Like That… picks up in a post-pandemic New York, with Carrie (Sarah Jessica Parker), Miranda (Cynthia Nixon) and Charlotte (Kristin Davis) definitely older — Miranda’s signature red hair is now gray — but still close friends. The absence of Cattrall’s Samantha Jones, though, is glaring. (We’re told that Samantha has moved to London and doesn’t speak with the other girls anymore over a perceived slight, which doesn’t fit with the fiercely loyal Samantha we know.) Samantha was a bold trailblazer of sex positivity who gave the original series its sassy edge, and that edge is sorely missing here. The sex talk is minimal this time around, with a tone that’s closer to Sex and the City‘s later seasons — more relationship dramedy than raunchy sex comedy. (The episodes are around 45 minutes now, too, instead of the original’s half-hour, adding to the dramatic feel.) 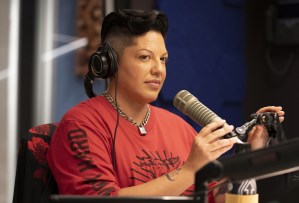 We’re also introduced to a host of new characters… with some fitting in better than others. It’s clear that showrunner Michael Patrick King, who shepherded Sex and the City through its glory years, wants to atone for the original show’s objectively terrible track record on diversity. (As he should!) But the sheer number of new faces threatens to overwhelm the core characters at first. We meet Charlotte’s Black mom friend Lisa (Nicole Ari Parker) and Miranda’s Black law professor Nya (Karen Pittman) and Carrie’s queer podcast host Che (Sara Ramirez) all in the premiere, and it’s a bit dizzying. At times, it almost feels like a spinoff, or Sex and the City: The New Class. The writing can still be clumsy when it comes to race and sexuality, but to the writers’ credit, they do show Carrie and company grappling with these issues and often fumbling them. It’s not always pretty, but it’s encouraging that they at least acknowledge how not pretty it is. 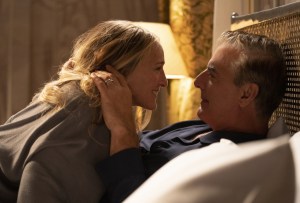 And then there’s Mr. Big. Carrie is still with her beloved hubby when the show begins, but their relationship takes a sharp turn in the premiere, which sends shockwaves through the whole season. It’s a big storytelling swing, to be sure, but the mournful reaction to it from the other characters rings a little hollow. It also traces a lot of the same beats that Carrie went through in the first Sex and the City movie when Big left her at the altar. The twist just adds to the somber tone of And Just Like That…, with precious few flashes of the wit and verve of the original. (Even the peppy theme song is muted.)

Mostly, though, it’s just nice to spend time with Carrie, Charlotte and Miranda again. The actresses step right back into their roles, and their banter is just as quippy and zippy as ever. Though the new characters’ introductions border on awkward, Ramirez and fellow new addition Sarita Choudhury, who plays Carrie’s realtor Seema, bring a refreshing energy to the show. Plus, Miranda’s story takes an intriguing turn in Episode 3 that offers real promise as a storyline and makes us rethink everything we thought we knew about her. No, this is not the classic Sex and the City we first fell in love with… but what it is now isn’t bad, either.

THE TVLINE BOTTOM LINE: The Sex and the City ladies are back with And Just Like That…, a more muted but ultimately enjoyable new take on the original.