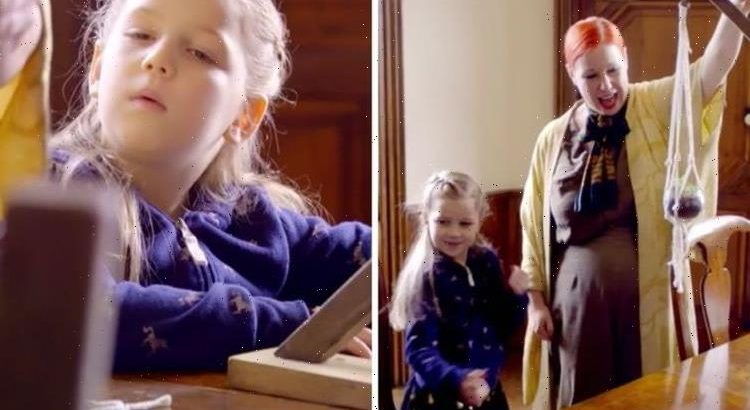 Escape to the Chateau: Angel and Dick talk toilets

During the autumn renovation in series six of the popular Channel 4 show Escape To The Chateau, Angel Adoree was filmed calling her daughter a unique name in episode six. Angel called her the adorable nickname when they decided to spend some quality time together ahead of their Halloween party.

In the episode, Angel told her two children Dorothy and Arthur that they were going to make hanging pots filled with plants and soil for their grandparents as a surprise.

Angel demonstrated to her children how the pots were made, and told them that if they could tie knots, they would be able to make their own hanging pots.

But as an excited Arthur and Dorothy got to work tying knots out of white rope, Angel let slip her affectionate nickname for her daughter.

Angel said: “Well done Dodi – can you hold this for me?”

A proud Angel showed off her completed hanging plant pot to her children who were both amazed at the final result.

She then prepared to add a glass plant pot to Arthur’s rope hammock which he had made by all by himself.

As Angel tried to place the glass pot into the rope, Arthur nervously said: “Don’t drop, don’t drop it.”

Angel replied: “It’s not going to drop baby. There you go, you have done a fantastic job. That is a lovely thing – isn’t it?”

Angel explained to Arthur and Dorothy that the plant pots would hang at granny and grandad’s house once the supporting frame had been secured to a wall.

The children often get involved in helping their creative parents around the chateau.

In a recent episode, the brother and sister even assisted their dad Dick with making honey from honeybees at a hive on the grounds of the chateau.

Later on in the episode – with Halloween just around the corner – Angel decided to get Arthur and Dorothy to make sweet treats for their friends who they invited round to celebrate the spooky occasion.

Angel said: “Halloween isn’t really big in France, but we are going to make it big at the chateau.”

She explained she wanted to celebrate Halloween at their French home as it was Arthur’s “favourite time of the year”.

Dorothy and Arthur were keen to introduce their friends to traditional Halloween horrors such as cupcake spiders and sponge and icing cemeteries for their fright night.

Angel and Dick bought their dream home in the picturesque French countryside half a decade ago.

Since then viewers have been able to watch the couple transferred Chateau de la Motte-Husson on the Channel 4 series, Escape to the Chateau.

The couple, and their children, moved from their Essex apartment to the dilapidated 19th-century French chateau and work around the clock to restore it back to its former glory.

Episodes of Escape to the Chateau can be viewed on Channel 4’s On Demand.