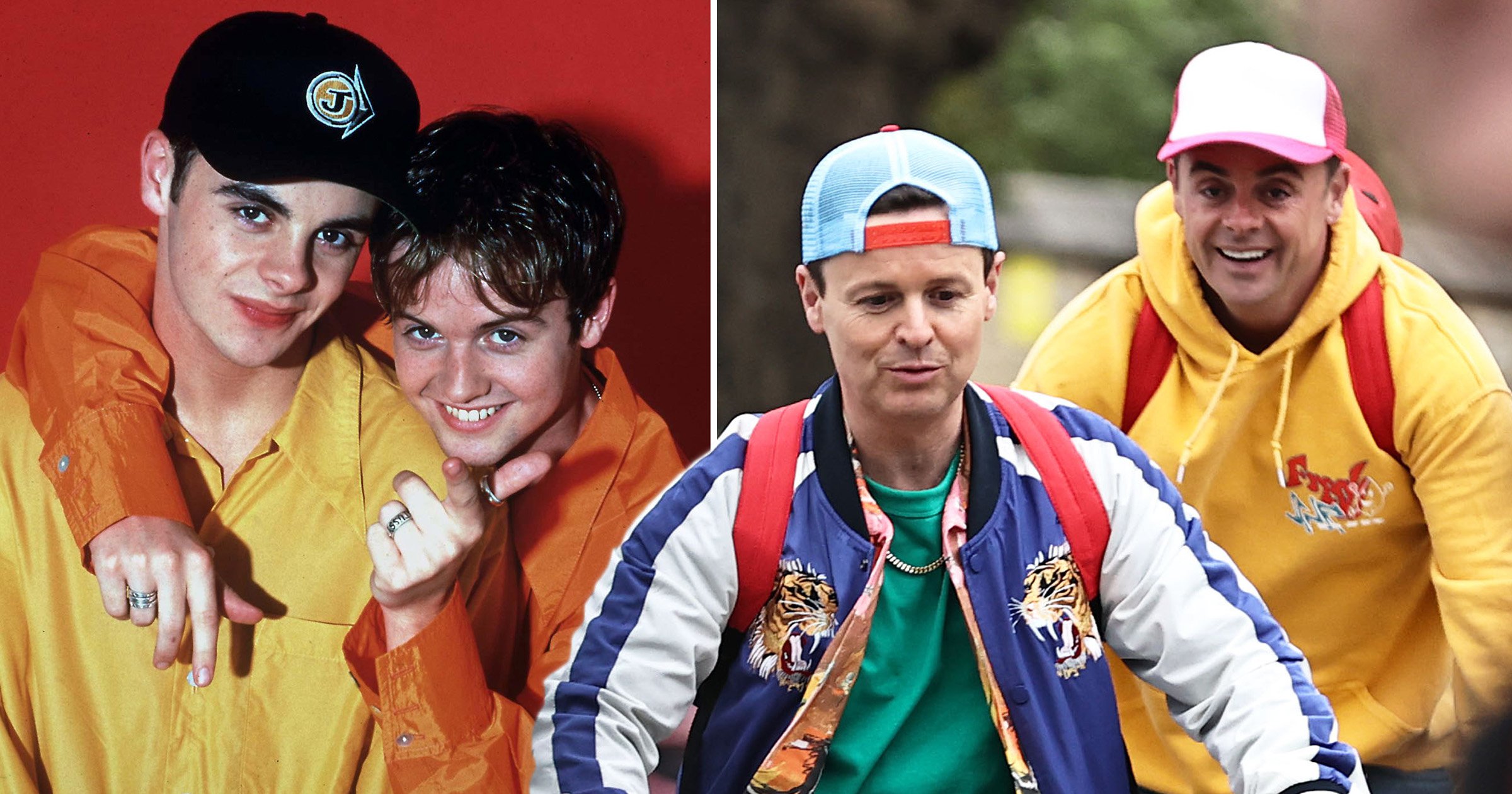 Ant McPartlin and Declan Donnelly have reprised their Byker Grove roles as PJ and Duncan almost 30 years after they left the children’s TV drama.

The iconic Geordie duo are returning to their roots from children’s TV show Byker Grove, which hit screens in 1990 and is basically responsible for making Saturday nights what they are today.

Ant and Dec, both 46, met on the drama series – which aired until 2006 – and formed a close friendship, sharing storylines on the show and a bond off screen too.

Now, PJ and Duncan have made a comeback for an advert for Santander, for whom the presenters became ambassadors for in 2019.

New photos show the loveable twosome larking around on bikes and wearing baggy sweatshirts and rucksacks.

Ant can be seen in a bright yellow hoodie and seriously baggy jeans, completing his look with a baseball cap and red backpack.

As for Dec, the dad-of-one donned light-wash jeans, a green sweater and bomber jacket, looking extra cool with a gold chain and blue cap, which he wore backwards.

The two looked world’s away from their usual polished selves, since we’re used to seeing them looking sharp in designer suits as they host our fave TV shows.

They seemed to be having a whale of a time as they unleashed their inner teenagers, and it’s not surprising they had smiles on their faces since Ant and Dec were reportedly paid £1million each to reprise their cheeky roles.

Ant and Dec were just 13-years-old when they met in their Byker Grove days, with the show tackling hard-hitting issues in the coming of age series about a youth centre in Newcastle.

Arguably the most memorable PJ and Duncan moment from the show was when PJ (Ant) was blinded during a paintballing match between the Grovers and their rivals from Denton Burn.

If you ask anyone to name a famous quote from the show, it’s likely they’ll instantly think of, ‘He cannit see, man!’, which is what Duncan (Dec) uttered after his friend was caught up in the incident.

The I’m A Celebrity… Get Me Out Of Here! presenters have never tried to distance themselves from their roots and often make reference to their PJ and Duncan days.

One of the double act’s most iconic moments from back in the day was in the show’s fifth series, in 1993, when PJ and Duncan started a band and went on to sign a record deal.

Ant and Dec went on to record a successful album in real life and released smash hit Let’s Get Ready To Rhumble in 1994 as the third single from their debut studio album Psyche.

It peaked at number nine in the UK charts and became #1 almost two decades after its original chart appearance in 2014, with the pair delighting fans by performing it on Saturday Night Takeaway.

Ant and Dec decided to retire their PJ and Duncan personas in the late 90s and wanted to be known solely as Ant and Dec.

It’s safe to say that worked out well for them, as they landed kids’ TV careers with SMTV – alongside Cat Deeley – and a whole host of other presenting gigs followed.

Now, we can’t get enough of Ant and Dec, and love tuning in to the likes of Saturday Night Takeaway, I’m A Celebrity and Britain’s Got Talent to catch up on their latest antics.

It’s unknown when the new Santander ad will hit screens, but it’s sure to be a true blast of nostalgia when it does.