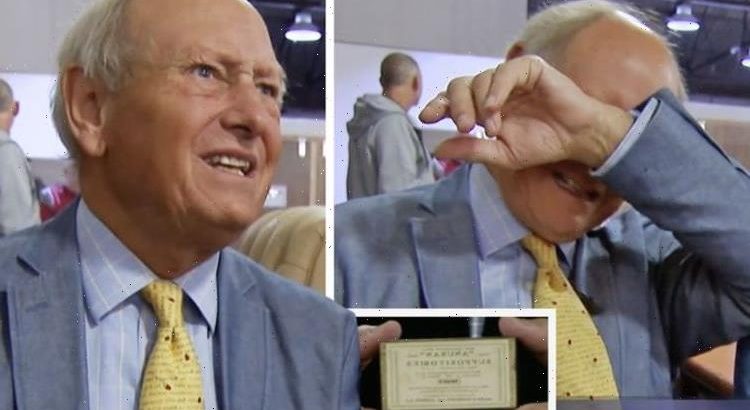 In a recent episode of Antiques Road Trip, experts Charlie Ross and Izzie Balmer were in the Cotswolds seeking out intriguing buys they could make some money on. Charlie had spotted an unusual medical item that he hoped would earn him a decent profit because it was from the war. However, when the item went to auction, he was left “regretting” his decision to purchase it because of the measly sum it made.

The Antiques Road Trip voice-over explained: “It was common for the British Army to issue emergency medical packs giving soldiers quick access to pain relief and other discomforts too, thus these suppositories.”

“Somebody has used three of them because there’s nine left out of 12,” Charlie remarked. “I mean, of course, that’s something that you would need, at any stage.

“But, in the war, I’m amazed that they had things like that. In the original box.

“Why not? I’m really quite interested in buying them. It’s a bit of history.”

He headed for the counter to discuss how much he could shave off the price tag.

The Antiques Road Trip voiceover commented: “Now, let’s see what deal can be done on the military suppositories, I dread to think…”

Dealer Jan replied: “But you’re not going to say that, are you, Charlie?” And he said: “I just said it! I do apologise.”

“For you, Charlie, you can have them for £12,” Jan revealed and they shook on the price: “£12? The suppositories have the vote!” Charlie said.

When Izzie joined Charlie at the auction house, he asked her: “Are you nervous?”

“I was going to say no, but now you’ve asked me, yes. Are you?” His co-star replied. “Shaking like a leaf, darling,” Charlie joked.

“Emergency war rations, you had them in your little ration tin,” Charlie told Izzie. “Crusty bread, little square of cheese, a large packet of suppositories.”

“Yes, these suppositories are going well,” the expert added.

“At the doorway with £18,” the auctioneer stopped and banged his hammer down.

Having bought the item for £12, Charlie only made a profit of £6 which he wasn’t best pleased about.

“Well, I rather regret buying them now,” Charlie told Izzie and then joked: “I should’ve bought a bit of furniture, possibly a stool?”

Antiques Road Trip is available to watch on BBC One every weekday afternoon at 4.30pm.