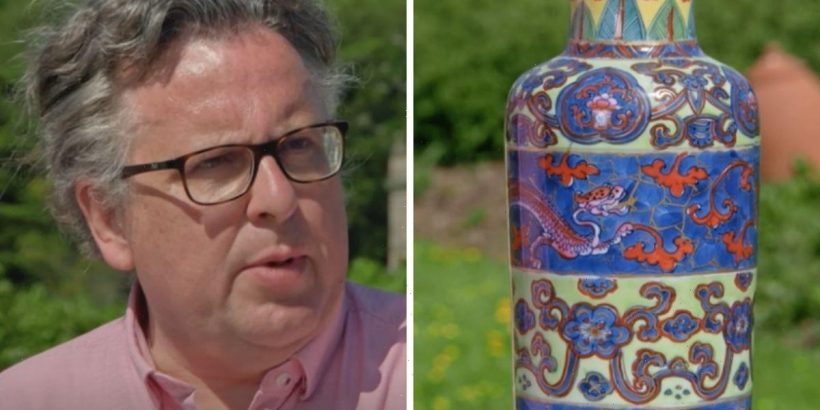 In a classic episode of Antiques Roadshow, BBC host Fiona Bruce took viewers to Dyffryn Gardens near Cardiff in South Wales where the experts valued a number of unique items. Will Farmer was thrilled to see a huge collection of Clarice Cliff ceramics, while Hilary Kay was amused by a toy figure of a fire-breathing mother-in-law. However, it was a colourful vase which caught the eye of expert Lars Tharp.

“Oh well, it’s the most colourful vase I’ve seen today. Where does it come from?” Lars asked as he admired the item.

The guest admitted: “Well I’m not really sure. My parents were living in Somerset for a long time, then ended up in Bristol and it’s just moved with them every time and then it came to me.”

However, the guest was left in shock after Lars made a surprise admission about where the vase came from.

“Well, first of all, I am going to surprise you because colourful though it may be, it did not start like that.”

“It’s actually a blue and white vase,” the expert admitted as the guest replied: “Goodness me!”

Lars continued: “We’ve got five zones… the top zone with these medallions, a central zone with dragons… rather matty little pink dragons running around.

“Then a very abstract zone and more blue grounds. How old do you think it might be?”

The guest explained she had no idea how old the vase was although, she guessed it was over 100 years old.

“It was probably made sometime around 1700,” Lars explained before the guest said in disbelief: “Good heavens.”

“So that makes it a good deal older,” the expert proceeded to say. “It came from China and it was typical of what was being exported from China to Europe to the great country houses of Europe.

“So this would have sat around probably with its pair companion on a shelf somewhere.

“And then sometimes the owner would have looked at these dowdy blue and white bars on the shelves and gone, ‘What on earth are they? Aren’t they boring?'”

Lars explained the owner would then have painted over the blue and white vase to make it more colourful.

He explained: “So they were sent along to an enameller who clobbered them.

“It’s a Dutch term which means to decorate, later on, clobbering and in the process they also managed to embellish with quite a lot of gold, because by then candlelight was big in interior lighting in the late 18th, early 19th century.

“So your dull blue and white vases suddenly become, ‘Hey, look at me sparkly vases’ and that’s rather nice.”

When discussing how much the vase could fetch at auction, Lars said: “I think it’s probably worth around £300 to £500 in spite of being clobbered.”

Elsewhere in the episode, expert Alastair Chandler was blown away by a 1960s Atmos clock that ran on air.

Antiques Roadshow is available to watch on BBC iPlayer.