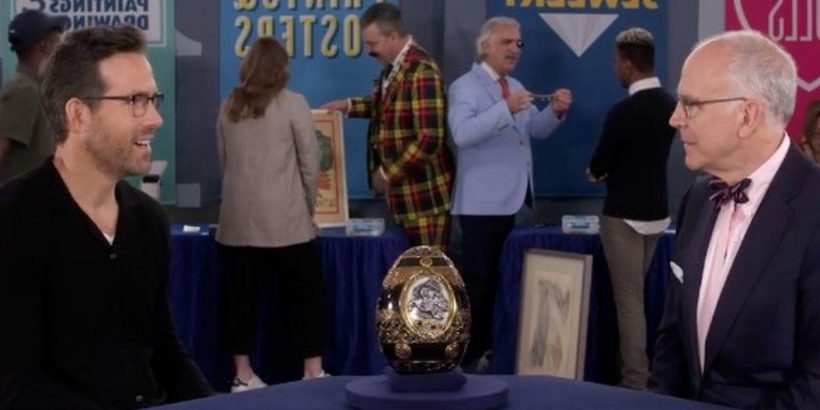 Ryan Reynolds shocked viewers of Antiques Roadshow US when he turned up with a special item estimated to be worth a fortune.

The Canadian actor, best known for his titular role in Deadpool, was in a skit to promote his new film Red Notice and brought on a golden egg said to be owned by Queen Cleopatra of Egypt in 30 BC.

In a conversation with the appraiser Lark E Mason, who takes the comedy role in his stride, they discuss its dubious origins.

Reynolds says the prop egg was given to him by a "friend at the museum" who is "not aware" he loaned it to him.

Mason replies: "So it sounds a little complicated. That's going to perhaps play into the value because of regulatory issues."

He continues: "I recognise that this was one of the three eggs commissioned by Cleopatra at the end of her life in 30 BC.

"Two of them went into public collections and, during World War Two, one of them disappeared.

"German soldiers had taken it to a secure hideaway and there it remained, up until recently."

He appraises the item as worth $100 million (£74 million) prompting Reynolds to say: "Oh wow."

Mason then references Dwayne Johnson's character in the Netflix movie, describing him as a "very muscular, handsome, talented man".

In the comedy heist film, Johnson plays an FBI agent tracking down the lost egg and Reynolds is a high-profile conman who has to forge an unlikely alliance with him.

The "Cleopatra eggs" never existed in real life and were not Egyptian in design, more closely resembling the Russian Fabergé eggs.

Reynolds posted the skit on his Instagram page with the caption: "The Red Notice scene I wish I'd shot."

One fan told him: "You are something else, a laugh a minute!"

Someone else described it as the "funniest thing" and another commented: "I'd watch the s*** out of a weekly show just about this!"

"Best character in the movie," said another fan.