For a sensible person, the idea of attempting to climb a sheer, 3,200-foot wall of granite without ropes or safety gear is enough to send shivers down your spine. As directors Jimmy Chin and Elizabeth Chai reveal in “Free Solo,” their documentary about Alex Bonnold’s death-defying climb of Yosemite National Park’s El Capitan, Bonnold is not one of those people. And to judge by the shots captured by the directors and their crew, neither are they.

Take this three-shot sequence from “The Boulder Problem,” a particularly tricky part of Honnold’s climb.

Shot 1: A vertigo-inducing, high-angle shot points straight down the face of El Capitan. Honnold is in the middle of frame, with the earth 2,050 feet below him in the background. He turns his body slightly diagonal as he reaches for a hand hold. As he pulls himself up, a cut on action to: 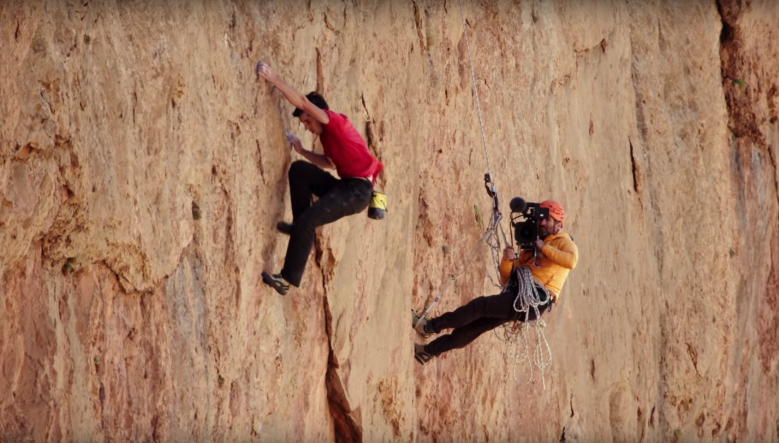 Shot 2: A tighter shot of Honnold from the side and behind; we see how his torso is almost horizontal as his feet find small crevices to support his weight. His breathing intensifies as his right foot carefully crosses inside his left, twisting his body, until his left foot swings wide reaching a crack in the granite. A cut on action as he looks up.

Shot 3: A high-angle, tight close-up of Honnold as he looks up, down, and up again. He reaches his left hand straight up to grab hold of a protruding piece of the wall in the foreground, which appears to be inches from the camera’s lens.

If it wasn’t for Honnold being one misstep or loose rock away from falling to his death, the scene would seem staged for camera. Each aesthetically balanced shot has an intentional composition that perfectly calls attention to the physical drama at that particular moment. The overlapping shots not only allow for match cutting on action, but the sequencing feels storyboarded with each edit reframing and intensifying the tension. The camera is still, the vibrant 4k image properly exposed and optically perfect. The intimate synced sound of Honnold draws us closer, heightening the subjectivity of the moment.

“I don’t particularly like big moves or really dramatic shooting that call attention to the shooting,” said Chin, who also served as a cinematographer and camera operator. “We like the classic cinematic shooting, but pushing the edge a little bit. We needed resources to support the scale of this and how we wanted to shoot. It had to be grand, it had to be really perfectly executed and push the edge of what I’d done in the past.”

National Geographic provided the resources: Honnold was a prominent free solo climber, the climb was historic, and Chin and Vasarhelyi previously directed the critically acclaimed climbing documentary “Meru.” However, it’s the way the filmmakers put those resources to use is what makes “Free Solo” play like a real-life “Mission Impossible.” 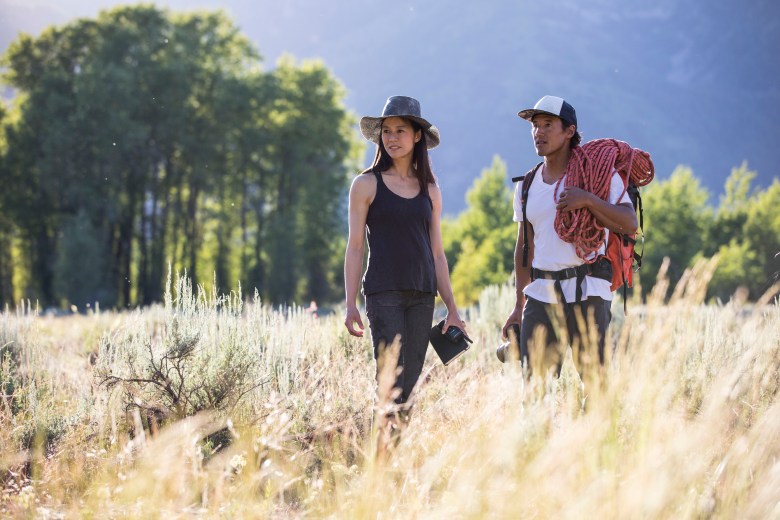 Jimmy Chin and Chai Vasarhelyi on location for “Free Solo”

Drones are not allowed in Yosemite, which meant everything had to come from someone holding a camera. Chin, a professional climber with 20 years experience filming “in the vertical,” knew he would need a handful of cameramen with his level of experience to climb and shoot.

“From my experience, it’s a lot easier to go from a world-class climber to great cinematographer, than a great cinematographer to world-class climber,” said Chin. “It has to be second nature to be on the wall and get to the top of El Cap. You literally go over the lip to El Cap and there’s 3,000 feet of air below you, and to even flinch is taking up bandwidth in the creative part of your mind. There’s a head-game aspect of this and we needed to be focused on the technical filmmaking challenges. The safety side and climbing can’t be a question.”

According to Vasarhelyi, there are only a handful of climbers/cameramen in the world who met these qualifications, and they all knew each other and had climbed or filmed Honnold in the past. Most importantly, the documentary had the resources for the camera team to film Honnold over two years as he trained using ropes and safety harnesses to figure out how to climb El Capitan.

“One thing about our high-angle shooting is we edit while we are shooting,” said Vasarhelyi. “So we’re constantly looking at the shots and trying economize on what is the impact and what we really need. That way we can improve and make it stronger. You can’t always afford to do it; it was nice to be able to have an assistant editor on site with our DIT.”

That shoot-edit-iterate workflow allowed Vasarhelyi and Chin to maximize what they got from each cameraman. They figured out which positions allowed multiple key shots, and would also allow them to quickly climb ahead of Honnold for the next one. 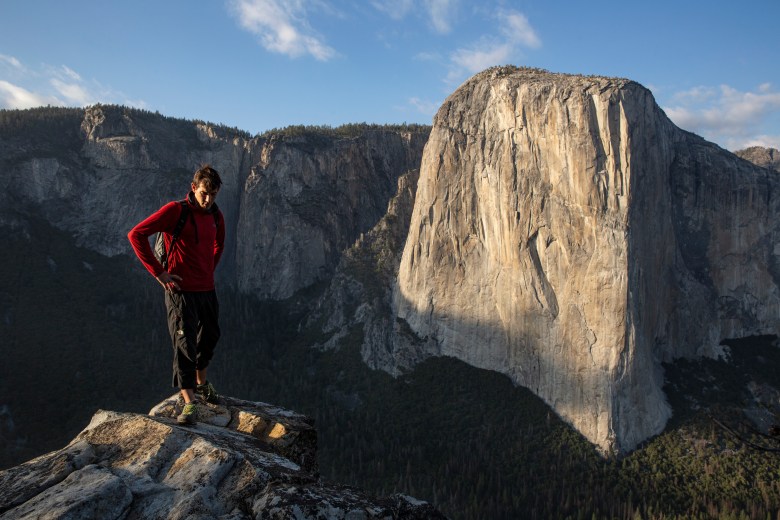 In the film, Chin and his crew struggle on camera with how to film and not affect Honnold’s climb. According to Vasarhelyi, the key to solving this problem was in the extended preparation.

“They’ve all been practicing for so long, Alex has an understanding of where to anticipate people,” said Vasarhelyi. “Yes, you don’t want to be in his eyeline, but he knows you’re around.”

Vasarhelyi and Chin wanted a grand scale that required shooting in 4k with cinema cameras and lenses, including a large 17-120mm zoom. Each cameraman had to be his own independent unit, serving as rigger, AC, and focus puller, while also carrying his food and the supplies needed to shoot and climb for the day. Figuring out how to climb and shoot with a large, fully loaded Canon C300 was a challenge.

“These were real big cinema cameras, it’s incredible we only smashed two [camera] bodies and lenses,” said Chin. “When you first drop in, [the cameras] are in packs. Then you get into position, pull it out of the pack, put the camera together, shoot, and you don’t want to pull it apart again to put it in the pack because you don’t have enough time.”

When possible, they would just clip the camera to their belts. For longer moves, Chin and his crew came up with a system in which the camera would clip to the harness and shoulder sling. That made it possible, although still difficult, to climb to the next shooting position in time.

Shooting with a long lens causes even the smallest shake to be emphasized and felt by the viewer, yet even the tightest shots in “Free Solo” are remarkably steady and smooth. Vasarhelyi said the camera crew at times got almost too good at shooting and climbing.

“These guys are so clean in how they shoot,” said Vasarhelyi. “It was actually feedback from us in the the edit room being like, we actually need some camera moves. It was so clean [it wasn’t] fitting into the verite aspect of the rest of the film.” 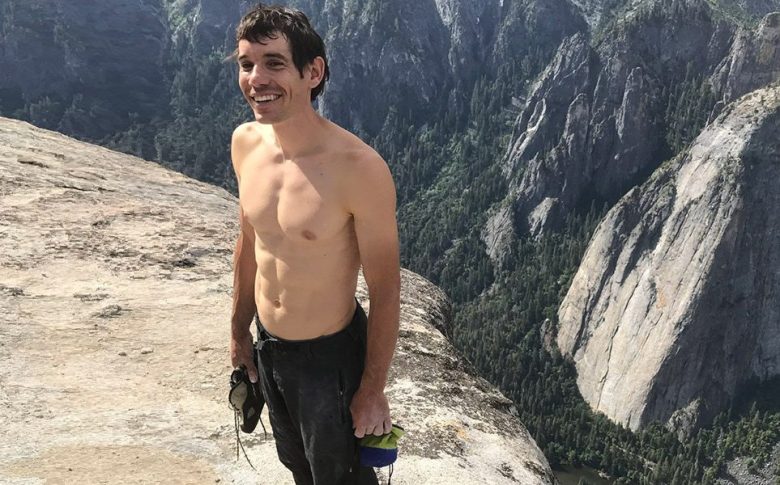 One of the hardest problems to crack was getting sound from Honnold, who often was too far from the camera to use wireless mics. Meanwhile, the wiring of the mic couldn’t interfere with his climbing, and any recorder on his body would need to withstand the rigors of climbing.

“The audio on this was challenging,” said Chin. “But we needed to hear Alex breathing, and you needed to hear his reaction if we had a long lens shot on him and didn’t have a camera on top of him.”

To solve the problem, they turned to production sound recordist Jim Hurst, who was a climber himself. He utilized a recorder that could transmit a signal to the camera, but also record to itself when the camera was out of range.

“Jim’s a climber, so he knew that you can’t clip it to your hip because you’re constantly shoving your hips into a giant crack, it’d get torn off,” said Chin. “So he had built it into the chalk bag [climbers use chalk on their hands to help their grip], and knowing that Alex would be sometimes have to move the chalk bag around his waist, he had it rigged so there was enough wire to move it and be unencumbered, but then have it come up through his shirt and taped to his chest.”