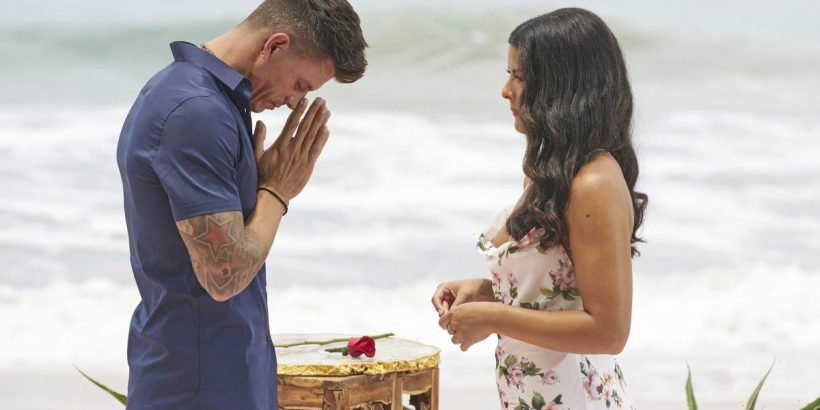 The Bachelor in Paradise finale had a happy ending for three couples who left engaged, and one of those couples was Mari Pepin-Solis and Kenny Braasch. The couple recently updated fans on their engagement via Instagram, but what comes next? Mari and Kenny recently sat down with The Ben and Ashley I Almost Famous podcast and gave the hosts their plans for what’s next.

Mari currently lives in Maryland, but Kenny calls Chicago home. Right now, the Bachelor in Paradise couple are continuing their relationship long-distance, but that won’t be for much longer.

Mari told the podcast, “Obviously we’ve been long-distance and we’re going to continue to do the back-and-forth kind of thing for now. I’m just waiting until my lease is up which happens in March and as soon as my lease is up, I’ll be moving to Chicago.”

Even though Kenny and Mari left Bachelor in Paradise engaged, their relationship wasn’t always smooth sailing. At one point, Mari told Kenny that she wanted to keep their relationship as a priority but still wanted the option of going on other dates just to make sure they were right for one another. Kenny wasn’t happy with her decision and started pursuing Demi Burnett.

Ashley Iaconetti, one of the podcast hosts, asked Mari how she felt about that particular bump in the road on Bachelor in Paradise. “When did you find out about the rendezvous that Kenny had with Demi in the Boom Boom Room?”

Mari went on to answer, “Obviously, that night was very heated. I didn’t know about the whole part about the condoms in the pinata thing until watching it back, but that night Demi, myself, and Serena were actually the last three girls to end up going to bed. Demi, me, and Serena ended up in the girls changing room and I said goodnight. Apparently, after I left Demi told Serena ‘I’m up to no good tonight’ and Serena came and told me. That night I actually didn’t sleep much and I noticed she never came to our room to go to bed.”

Couples from The Bachelor universe often make the rounds to different publications once the world knows about their relationship after the show. Recently, Kenny and Mari sat down with Glamour to update the world on their future plans and whether or not there were any surprises after the show ended.

Both seem very happy with their current status, and when asked if they learned anything new about each other after Bachelor in Paradise, Kenny was the first to speak up.

“To be honest, I don’t think so, which is kind of crazy because we have spent a decent amount of time together post show. But maybe it’s because we did spend a lot of time together at the tail end of Paradise. We really did get to know each other very well, and there really hasn’t been any surprises yet.”

We’re happy the two seem to have found their person, and we can’t wait to see where they go from here.