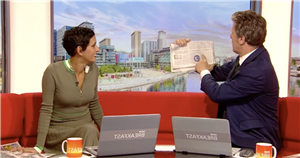 BBC Breakfast presenter Naga Munchetty didn't hesitate to shut her co-host Charlie Stayt down on Friday when he admitted he was 'wasting time' live on-air.

The duo were on the red sofa looking through the newspapers of the day, as Charlie flagged an article he wanted to read aloud for viewers at home.

He announced: "You’ll just have to bear with me a moment while I find the story I'm going to tell you… so I’m just flicking through the papers.

Naga chipped in: "Looking forward to it!"

Charlie continued to flick through the paper, and sighed: "Hopefully… I'll get to the right page."

Naga was left collapsing into hysterics as Charlie sighed again, before announcing: "And here we go, I’ve found it now. What did we waste there – 12, 15 seconds? It’s all right!"

Which is when Naga chipped in: "It felt like a lifetime" – completely laying waste to Charlie's hopes of downplaying the incident.

"Did it feel like a long time?" he asked. "Were you getting worried?"

He explained: "So it’s down here, the story, and I’ve not seen this before… hold on, hold on."

The paper took some wrangling to get into place so Charlie could hold it up for the camera, but he eventually managed to sort himself out while Naga giggled at the side of him.

Charlie then began to tell a story of the effects of volcanic eruption at La Palma, explaining: "So you’ll be aware of the volcano eruption on La Palma, and it’s caused all sorts of problems.

"A helicopter spotted some dogs that had been trapped in a yard, which has been completely surrounded by lava. People have been evacuated, but the dogs are trapped within the lava, and they were spotted from the helicopters above."

Naga questioned: "Why don’t they just go down and get the dogs?"

As Charlie responded: "Because the helicopters can’t get down to it. So they can take imagery but they can’t rescue them."

But that wasn't explanation enough for Naga, as she pressed: "Why?"

Charlie replied: "I don't know. Maybe they’ll get to that point where they can rescue them, but [now] they can stop them starving."

Thankfully Naga was impressed by his choice of story, as she complimented: "Nice. It was worth waiting for, Charlie!"

BBC Breakfast airs from 6am every day on BBC One.