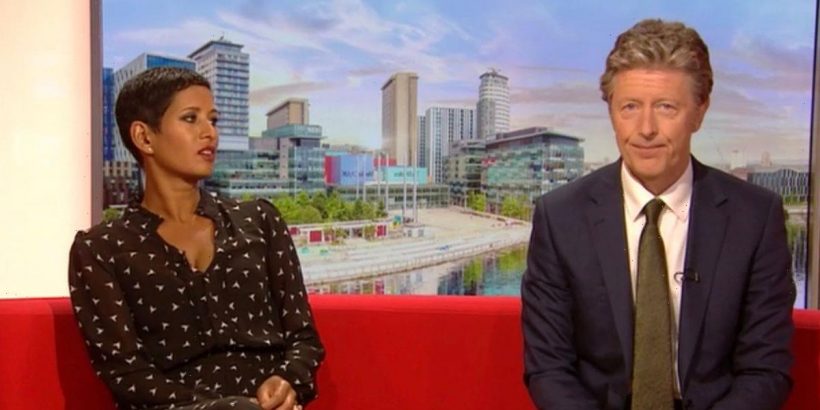 BBC Breakfast was chock full of awkward moments on Thursday (August 25) as one star criticised the "tumbleweed silence" as his joke failed to land.

The sports competition, based in Manchester, has elected a brand new mascot dubbed RugBee, designed by two nine-year-old competition winners and evocative of the Manchester bee.

Determined to make as many bee puns as he could, Chetan's report concluded that the costume had "created a real buzz", before he giggled: "They had another preference, but in the end they went with plan 'bee'."

A confused Charlie questioned: "What was the preference?" as Naga rolled her eyes, asking him: "Oh, didn't you get it?"

"I spent all morning thinking that up, I'm out of bee puns," Chetan confessed. "Charlie's not impressed."

Blustering, Charlie insisted: "I have got it! I've got it now. It's better when someone doesn't get it, isn't it?"

But Chetan wasn't pulling his punches as he replied: "No, it doesn't land. Naga getting it made me feel a bit better. If there'd been stone cold silence…"

Collapsing into giggles, Naga agreed: "Tumbleweed. That happens too."

Trying to cover his tracks, Charlie said: "You did a very dry delivery there, which is good. Your delivery was excellent, so that's what threw me off. I thought you were just winding me up," he told Naga.

Chetan replied: "That's made me feel better. Delivery: tick, and one laugh. Listen, I'll take it. It's early in the morning."

Attempting to wrangle the conversation back on track and proceed to the weather report with Carol Kirkwood, Naga said: "Let's see if Carol can top that."

Charlie asked: "Carol, did she get it? I don't know if she got it because I couldn't see if she's nodding and smiling… oh, she did? Well, it's easy to say that when the camera wasn't on you!"

Affronted by Charlie's insinuation, a chuckling Carol said: "No – I had a little chuckle, Charlie, at both of them! I thought they were brilliant. Well done!"

BBC Breakfast airs daily from 6am on BBC One.