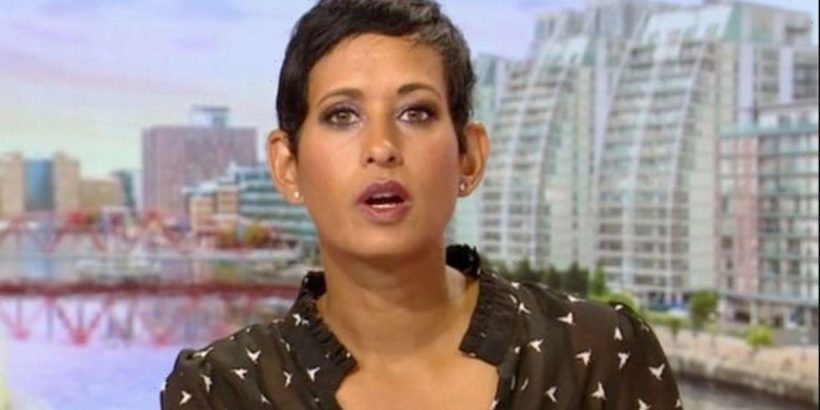 The 46-year-old presenter was jokingly scolded by Matt, 47, after she made a small dig while handing over from BBC Breakfast to Saturday Kitchen.

Sitting alongside co-host Charlie Stayt, Naga had just finished an interview with show regulars Professor Linda Bauld and Dr Chris Smith before she informed viewers that Matt was up next on BBC One with Saturday Kitchen.

The chef then appeared on viewers screens to tease his upcoming show but Naga accidentally made an awkward dig.

Introducing Matt's show, she began saying: "At 10 o’clock we are off air and Matt Tebbutt takes over in the Saturday Kitchen cooking up all sorts of delights."

Turning her attention directly to Matt, Naga asked: "I'm excited about your program today. What have you got on?"

Matt playfully hit back: "What do you mean today? You should always be excited about our show."

Without giving Naga a chance to explain, he quickly began explaining what was going on over on his show today.

He told viewers how his special guest of the day was TV presenter Angela Scanlon.

Sitting next to Matt, a smiling Angela could be seen as she said to viewers: "Hello, good morning."

He said: "As usual it's down to you guys at home to decide what Angela gets to eat at the end of the show.

"Go to the website for voting details and we'll see you at 10."

Naga's cheeky swipe comes just days after she made a majar gaffe live on air.

After watching a clip of Wally the walrus, she was was adamant that there was a second walrus in the clip.

She said: "Wally is safe, he seems friendly. Did you see? I’m sure there was a little walrus at the end going past the camera. Can we rewind? I think I saw one."

As the clip reappeared on screen, Naga said: "There’s wally trying to get on the boat, just wait for it – there!"

Sure enough, right at the bottom of the screen something appeared in front of the camera – something which very much resembled a blonde person's head.

Charlie quipped: "No that’s a persons head," and in response he heard a defiant "nope" from Naga.

He added: "No really, we can show this many, many times that’s definitely someone’s head with hair. That’s not a walrus."

Naga responded: "That’s not definitely! It could have been your head really."

Charlie requested a poll from viewers to determine whether it was a walrus or a head, but BBC Breakfast bosses are yet to take him up on it.

BBC Breakfast airs on BBC One daily between 6am and 9am