Following reports that more than 15,000 coronavirus test results had become “lost” after a supposed error with the Test and Trace system, BBC Breakfast’s Minchin was keen for answer from Coffey this morning. The pair clashed on a number of occasions as Louise looked for definitive answers but Coffey remained adamant the process was back on track and defended the Government over the “glitch”. It didn’t take long for BBC viewers at home to weigh in with their thought, with some branding the chat as a “car crash”.

Minchin kicked off the discussion by raising the point nearly “16,000 test results” were lost in a “glitch”, asking Coffey: “This was supposed to be a world-beating test and trace system, what happened?”

“Well, I think it’s important to stress that people who had the tests got their results,” Coffey replied. “PHE had this glitch but they idenitifed it.

“So it is being rectified so we can get those, the contacts into the system and be contacted as deemed appropriate by the test and trace regime.”

Later in the chat, Coffey admitted people may find it “irritating” but that reparations are being carried out and being “dealt with quickly”. 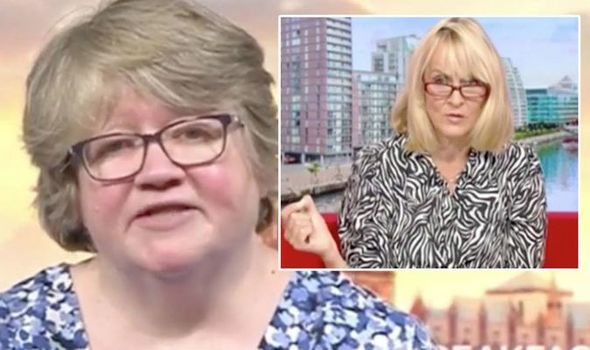 She reaffirmed: The message is still there, cases are on the up, these measures are important to try and help bring down the infection rate spreading,

“That’s where everybody in the country can play their part.”

Louise probed further, however: “In order to stop it spreading, those first 48 hours is critical and that opportunity has been missed with these people hasn’t it?”

Coffey responded: “Well for the number of people who haven’t been through the process of deciding whether they need to be contacted to isolate or not, I recognise what you’re saying.

“But the error has been picked up and is being dealt with and I don’t think there’s anything we can change about history,

“We can only change how we make sure these kind of errors do not happen again in the future.

However, Coffey’s response left plenty to be desire by a number of viewers who took to Twitter to voice their opinions on the debate.

“Another car crash interview with no answers…..just don’t look at the government..(not their fault) wash your hands ie it’s your fault,” said one viewer.

A second added: “‘We can’t change history – we can only change the future’ states Therese Coffey, after yet another government cock-up (losing 16,000 positive covid cases down the back of the governing sofa). We could do that by changing our government…”

“Therese Coffey tells @BBCBreakfast she doesn’t know how many people were not traced as a result of nearly 16,000 positive cases were not added to the system in England and she doesn’t know if those people have now been traced. A complete shambles,” weighed in a third.

While a fourth praised the MP: “Theresa Coffey was superb on @bbcbreakfast.”