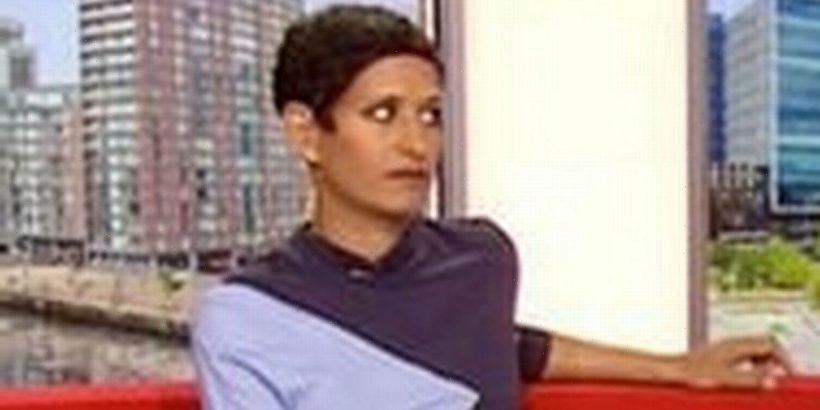 BBC Breakfast presenter Naga Munchetty and Charlie Stayt presented the Saturday edition of the show as they led a report on demolitions and chimneys.

But after Charlie decided to go in a tangent about cartoon characters, Naga was quick to take a cheeky dig at her co-star's long story.

Naga was left despairing when weather woman Sarah Keith-Lucas rushed to Charlie's defence, leading to the pair having a disagreement on air.

Charlie kicked things off by saying: "You know when a cartoon character's legs are running and there’s a moment where he doesn’t start moving and then it starts moving?"

Referring to the TV director in his ear, he added: "Very much like the roadrunner, thank you. The director just reminded me. It’s exactly that."

Naga was seen looking very quizzical during Charlie's story as she said: "The cartoons aren’t real, the chimneys don’t have feelings so they don’t know and it's a shame we don't have that tumbleweed effect."

She then turned over to the weather to include Sarah in the conversation, saying: "Can I just say Sarah was biting her lip because she couldn’t believe what you were saying."

But Sarah shot her down as she replied: "Yeah I kind of sort of know what you mean Charlie if that helps."

Naga looked at her in disbelief as she exclaimed: "Oh Sarah really?"

A happy Charlie chipped in: "I take that as absolute confirmation. Sarah knows exactly what I was talking about. Thank you Sarah!"

Sarah cheekily replied: "Thanks Charlie. You can slip me that tenner later on right?"

Viewers took to social media to comment on the exchange, as one posted: "Charlie’s roadrunner analogy for demolition! Hahahaha. Naga being a perfect soundboard for the silly fun! Love it!"

Another joked: "Can someone check what’s in Charlie Stayt’s mug this morning?"

A third said: "Naga and Charlie talking about chimneys being demolished this morning 1. Cartoons aren’t real, 2. Chimneys don’t have feelings had me in stitches."

A fourth backed Charlie as they said: "I get it Charlie! Also, when the cartoon character runs over a cliff, but doesn't drop until they realise!"

BBC Breakfast airs weekdays at 6am on BBC.