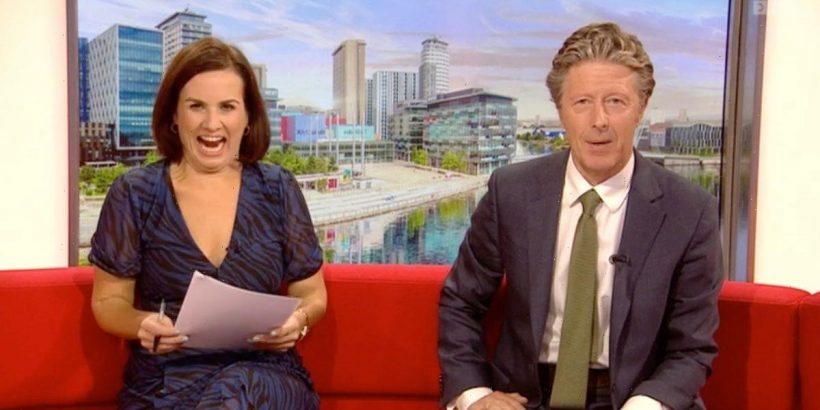 BBC Breakfast presenter Nina Warhurst took a subtle swipe at Holly Willoughby and Phillip Schofield as she addressed the boos they received at the National Television Awards on Thursday (October 13).

The 42-year-old sat alongside Charlie Stayt, replacing his regular Friday partner Naga Munchetty on the red sofa to present the day's headlines.

Chat quickly turned to the NTAs, which took place at the OVO Arena in Wembley last night and the pair spoke to TV critic Scott Bryan about many of this year's winners.

Holly and Phil took to the stage after This Morning won Best Daytime show, but weren't met with the kindest of responses as the crowd could be heard booing the pair as they headed to collect their award.

Referencing the incident, Nina asked: "Did we hear though.. We were listening in to Holly and Phil going up to collect their award. Obviously there's been huge controversy around them since the visit to the Queen's coffin.

She whispered: "Were there some boos in there?"

"There were some boos," stated Scott.

He added: "Some sources told me there were some boos from some sections of the crowd when they did accept their win for best daytime."

The critic clarified that the boos went away once they started doing their speech, but believes the duo are "relieved" that This Morning still won, despite the recent controversy.

"I think it shows that they've still had a huge amount of support for the show at least. But because of the controversy surrounding allegations that they pushed the queue and other things.

"They've certainly been in the public light but not for reasons they might want to," adding that the boos were "a big" talking point from the event.

his is a live TV story and is being constantly updated. Please refresh the page regularly for the latest news, pictures and video.

You can also get email updates on the day’s biggest TV stories straight to your inbox by signing up for our soaps and Hot TV newsletters .

Get all the very best news, pictures, opinion and video on your favourite TV shows by following Daily Star every time you see our name.

Keep up-to-date with your must-see TV stories, features, videos and pictures throughout the day by following us on Facebook at facebook.com/DailyStarShowbiz