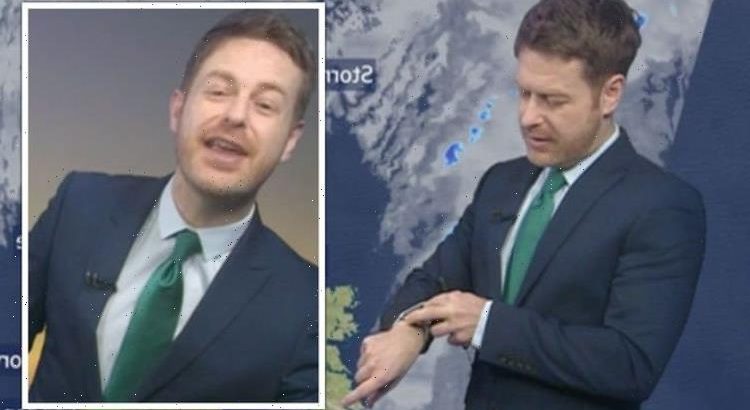 BBC Breakfast was hosted by Roger Johnson and Katherine Downes on Sunday morning. The presenting duo were joined by meteorologist Tomasz Schafernaker who gave viewers an update on the weather, however, his report soon went awry when his smartwatch went off. The device began to make noises in the middle of his broadcast and he rushed to silence it, asking viewers to “ignore” it. However, BBC hosts Roger and Katherine couldn’t help but laugh at their co-star’s blunder.

Tomasz was mid-way through his first weather report on the programme when suddenly viewers heard a voice coming from his smartwatch.

Quickly realising his mistake, Tomasz exclaimed: “Oh dear, I’ve done this before. I thought I switched it off.

“That’s a phone going off, watch going off again. Anyway, ignore that,” he added, before continuing with his weather report.

Wrapping up the segment, Tomasz said: “So, I think overall the week’s looking pretty settled for many of us, apart from that little weather front that’s moving through right now.

“Temperatures about the average for the time of year. On the whole, I think it’s fine. Back to you two,” he concluded.

However, Roger and Katherine couldn’t help but question the weatherman over his mistake.

“You were suggesting that you’re all alone in a little cubbyhole somewhere, but you’re never alone are you?” Roger remarked.

Tomasz replied: “I know and I always remember to switch this, to silence this thing, but it’s just the first broadcast now.

“I’ve switched it off now,” he confirmed.

“Don’t worry. It’s twenty past six in the morning, no one’s watching,” Roger joked, in an attempt to reassure his colleague.

Katherine commented: “I did not know what was going on there for a moment.

“This kind of small robot voice coming out of Tom Schafernaker,” she laughed.

“That was funny, wasn’t it?” Roger added, before moving on with the programme.

Unfortunately for Tomasz, he was reminded of his mistake again later on in the show.

As Katherine handed over to him for another weather report, she teased him about the blunder.

She remarked: “Time to chat to Tomasz with a look at this morning’s weather. Tomasz, watch off ready to go?”

Tomasz replied: “Yes, it is. If you were watching about an hour ago, my smartwatch went off.

“But, no, it’s all on theatre mode now. We won’t be interrupted,” he confirmed.