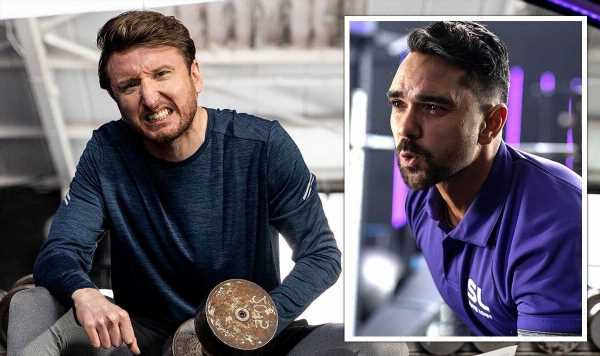 BAFTAs: People Just Do Nothing

Steve recently starred in the 2018 BBC series People Just Do Nothing and found success alongside co-star and best friend Allan ‘Seapa’ Mustafa. The pair have teamed up alongside Callie Cook, Mandeep Dhillon, Thomas Gray and Lucien Laviscount for a new BBC Three comedy, Peacock. Speaking about the new series and what it was like working with his co-stars, Steve admitted to feeling “unprofessional”.

Speaking exclusively to Express.co.uk, Allan and Steve touched on working together before, where Allan described it as a “comfort blanket”.

He admitted: “It was good, it was nice having that comfort blanket of your best mate on the set!

“And Ben, the other writer, he was quite close with us during People Just Do Nothing as well, so we get the best out of each other in that sort of way.

“The most nerve-wracking thing was, or just working with other people, with proper actors that haven’t worked with us.

“And seen the way we work, we all sort of fall together as a family.”

Steve added: “We kind of present our lack of professionalism as improvising and not knowing our lines, we don’t even need to know our lines!”

Mandeep interjected and praised their acting: “They’re great. (It’s) amazing after being a fan of the show and then getting to work with them.

“We said this before with real actors, where these guys are really good!”

“I think you guys are being hard on yourself,” Callie also added. “You’re so on it, and one of the most important things is when the actors are happy.

“If an actor is in a bad mood, then it affects everyone, and it affects you working with them, and these guys are always just like so up for it, being really silly and fun.”

Steve joked: “I give myself very few lines due to feeling unprofessional amongst these guys!”

Allan went on to speak about the comfortability on set and put that down to the director being so chilled with his working style.

“It is down to the director as well, creating the atmosphere that we were allowed to f**k around as long as you do the work, if you feel comfortable enough, you’re going to get the best out of us.”

Steve agreed: “His energy on set is always so chilled out, he never seemed like he was worried about us or anything.”

The series synopsis reads: “Andy Peacock (Allan ‘Seapa’ Mustafa) is a successful personal trainer, he has a great car, a penthouse, a carefully constructed dating profile attracting the attention of beautiful women.

“He’s living the dream, but something isn’t right, and after a mushroom trip brings him face to face with his demons, he realises that he needs to make some big life changes; it’s time for people to start taking him seriously.

“Andy soon realises that personal growth is a challenging process and that there are no shortcuts, and as he pushes towards becoming a better person, he meets Georgia (Mandeep Dhillon).

“For the first time, Andy feels like he can be himself with someone, and his dating life no longer consists of girls who view him purely as a sexy PT and a tick on the bucket list.

“As Andy begins to finally start sorting his life out, his work rival Jay (Lucien Laviscount) seems determined to test him and get in the way of his happiness.

“When Jay makes a move on his most lucrative client, Andy’s ego gets the better of him, and he challenges Jay to a winner takes all weights competition in front of the entire gym. But will it ruin his chances with Georgia?”