By the time Timothée Chalamet signed up to play a drug addict for “Beautiful Boy,” the role that would change his life was already in the can. It was “Call Me By Your Name” that would earn him an Oscar nomination, an invite to the Academy, an enviable slew of offers, and a fanbase so dedicated to the young star that they go by the catchy moniker “Chalamaniacs.” The actor was cast in Felix Van Groeningen’s addiction drama “Beautiful Boy” in February 2017, just weeks after Luca Guadagnino’s romantic epic debuted at Sundance, kicking off what would end up being a months-long awards campaign that forever altered Chalamet’s career trajectory.

The part of Nic Sheff offered Chalamet yet another chance to slip inside an emotional role, but Van Groeningen’s big screen adaptation of two books about Sheff’s teenage drug addiction (one written by Nic, the other by his father David, played in the film by Steve Carell) demanded that the actor further stretch himself and his talents. Filming took place from March to May, though Van Groeningen also arranged a two-week rehearsal period with the cast before shooting.

To play Nic in the throes of his addiction, Chalamet dropped close to 20 pounds, as the most intense of the film’s scenes — including a crushing sequence that sees Nic hospitalized after an overdose — required his thin frame to be even more winnowed down. For fans of “Call Me by Your Name,” it’s a jarring change from Chalamet’s turn as the romantic and impulsive Elio, whose life is changed by the introduction of Armie Hammer’s alluring graduate student Oliver.

Both films focus on pivotable times in teenage lives, but while Elio embraces love and the possibility of evolution, Nic is captivated by a wild lifestyle and the many vices that go with it, nearly destroying his young life and his family in the process. And yet both “Call Me by Your Name” and “Beautiful Boy” hinge on the bond between fathers and sons, and audiences who loved watched Chalamet alongside Michael Stuhlbarg in “Call Me by Your Name” will see that affection reflected back in his stirring performance alongside Carell.

While the subject of drug addiction has inspired a number of critically lauded films over the years, from Darren Aronofsky’s wrenching “Requiem for a Dream” to Dorothy Davenport’s lost silent film “Human Wreckage,” Van Groeningen’s film bucks Hollywood convention by way of a narrative rooted in the Sheffs’ very real, heartbreaking experiences. There are tragic films on the basis of their stories and raw ones built around performance; “Beautiful Boy” attempts to exist somewhere in between the two. 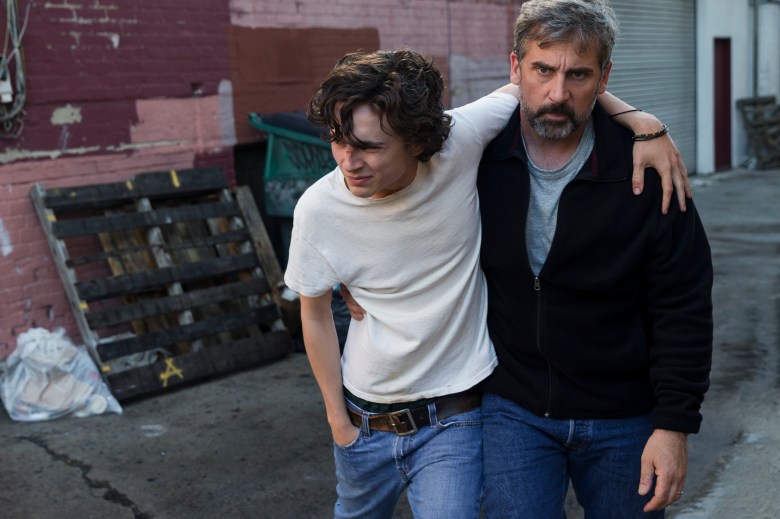 On screen, that means following a cyclical narrative that sees the Sheffs enduring overdose after overdose, rock bottom after rock bottom, trip to rehab after trip to rehab. Chalamet and Carell get dirty, too, and “Beautiful Boy” doesn’t attempt to paint either of them as reductive as “the good guy” or “the bad guy.” The film doesn’t even offer a hard and fast reason for Nic’s addiction.

As Chalamet told IndieWire in a recent interview, “You can’t really point to a why, it just is.”

That was the primary draw for both Chalamet and co-star Carell. The two actors are simpatico when it comes to their appreciation for the tough material. “It’s messy. It’s incomplete,” Carell said. “It’s not your typical movie about this subject. And I think that’s what drew us to it. I didn’t want to do the after school special of addiction. We wanted it to feel more truthful than that.”

Before Chalamet started shooting the film, he met up with the real Nic Sheff for lunch in Los Angeles. Chalamet expected that the meeting would give him more insight into Sheff off the page so that he could better portray him on the screen, but even Chalamet was thrown for a loop when Sheff arrived with an unexpected piece of family history alongside him: his kid sister, Daisy (played in the film by Oakley Bull and Carlee Maciel). “I felt like I already kind of knew them because I had read the books, but I got a chance to actually know them,” Chalamet said. “I didn’t leave that meeting feeling claustrophobic, but rather like I had been set free in some way and that I could get after it.”

It would be easy for any actor to get bogged down by the weight of playing a real person on-screen — especially a real person whose life story is as upsetting as Nic Sheff’s — but Chalamet said he felt liberated by Sheff’s own expectations. “I didn’t know what the parameters were going to be of playing him, and it would be totally acceptable if he was stringent about certain things, the way if somebody were playing you or me, we might be,” he said. “And instead he was totally open to the experience already and the idea that this was going to be made into a film.”

He attributed part of that freedom to the way that both Sheffs are, just like Chalamet and his co-star Carell, artists by trade. Chalamet, still finding his way through his craft, was more than happy to transform into something new. “They have their own creative processes,” he said. “They know intrinsically the process of doing well as an artist by doing a lot of bad around it. I find a couple of bad takes can lead into a good one.”