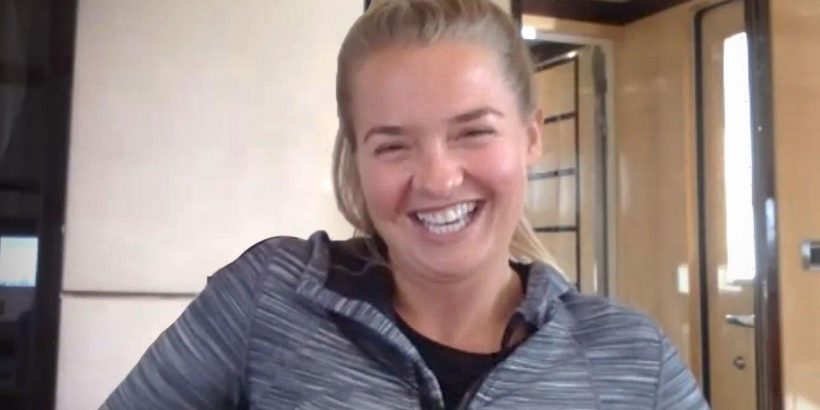 If you’re going to say something mean about Daisy Kelliher, say it to her face. It’s a lesson the Below Deck Sailing Yacht chief stewardess learned for herself by watching back season 2 of the show, seeing her interactions with Chef Natasha De Bourg and First Officer Gary King play out, with the added benefit of watching their green-screen confessional interviews and interactions with the other crew members.

“Natasha made it very obvious that she had a problem with me, which I appreciated more,” Daisy admits to ET, Zooming in from a boat outside of Spain (and, no, she’s not filming any version of Below Deck). “Whereas with Gary, it was a bit like, ‘Why didn’t you say that to my face?’ We could have been a really strong team.”

“His comments in the green screen surprised me more than Natasha’s,” she adds, which is saying something, seeing as Natasha called Daisy a “b**ch” more than once in her confessionals.

“I was quite offended, because I constantly went up to Gary confronting him, being like, ‘I heard this. I feel like you have a problem with me. Is there an issue? I’m not offended. Let’s talk about this,’ because I liked him a lot, and he’s a good worker,” she says. “I just didn’t get what the issue was with me, and I constantly created this safe environment for him to talk to me. He was like, ‘No. There’s no issue. There’s no issues.’ So, I’m like, oh, OK. Then I go back and it was just this constant circle.”

That cycle continues as the second half of season 2 begins, as first teased in the midseason trailer, with Gary declaring the one thing he would change about the charter is Daisy, to which she responds, “Im sick of being made out to be the f**king b**ch of the group.” 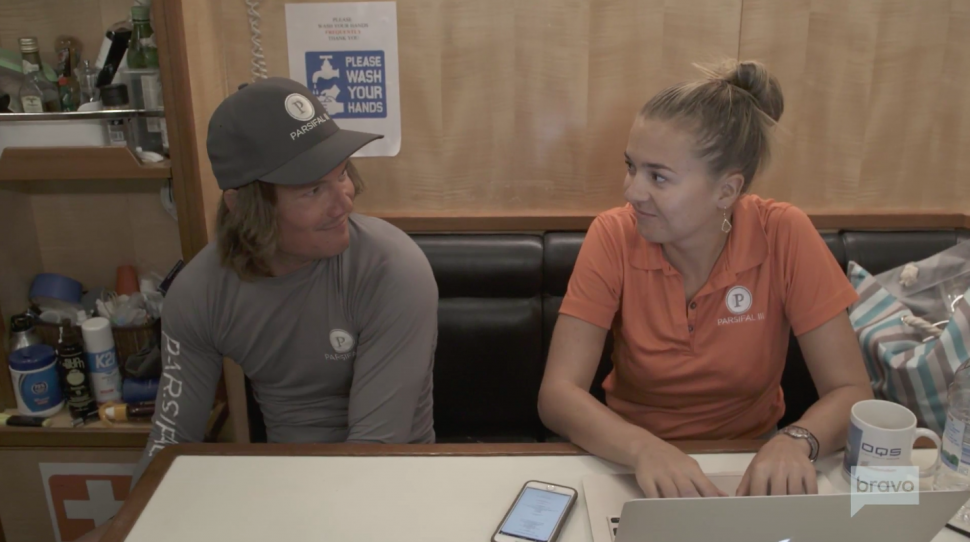 “It was just this back and forth,” Daisy says. “I learned a lot from the season, as well. Maybe I’m a bit set in my ways, but I was just asking for a bit of help. I never threw [his] department under the bus, never said they were s**t at their job. I never said they were doing bad. I just said, if you’re sitting around, come and wash a couple of dishes. But that seemed to be a bigger issue.”

Daisy hints that she and Gary never get to the crux of their feud, but does share that she and Natasha have gotten to a better place. Natasha even recently apologized for her behavior on Watch What Happens Live With Andy Cohen.

“She texted me saying, ‘I’m sorry that I called you a b**ch,’ and I was like, ‘Natasha, we both knew we were going to slag each other off,'” Daisy says. “She did say that she wanted to publicly apologize, I said she didn’t have to, that it was between us. If she wanted to for herself then to go ahead, but I didn’t feel the necessity to do that.”

A lot of Daisy and Natasha’s disagreements were rooted in guest feedback, which Natasha took as personal before watching the episodes.

“I think Natasha’s a bit newer to the industry than I am, and a big part of my job is eavesdropping into conversations and passing feedback,” Daisy notes. “It’s a crappy part of my job, but often the guests will say to the chef, ‘That was amazing. That was incredible.’ Then they’ll pull me aside and say, ‘Oh, there was a little bit too much salt,’ or, ‘It was a little bit heavy.'”

“But that’s what I get paid for, and somebody has to do it,” she continues. “I think Natasha missed the memo somewhere along there that I’ve never seen guests give a chef criticism, ever, ever, ever in my life, because that is my job. That’s what I’m paid to do. I think we all learned a lot from this season, and it was great that she was able to learn that next time somebody says something it’s like, don’t shoot the messenger.”

Natasha also learned a lot about eggs, specifically what constitutes scrambled, over-easy and poached, after multiple orders returned to the galley uneaten. 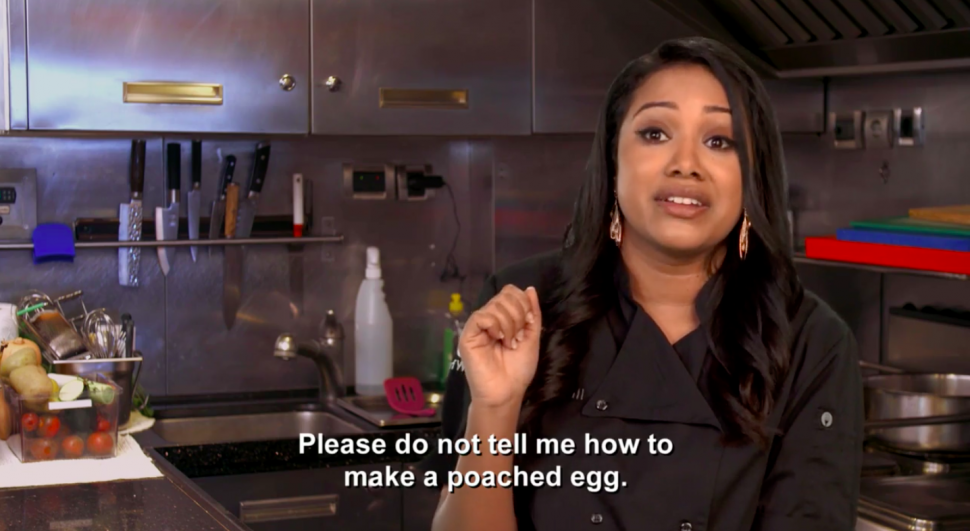 “You know what? The eggs… during the season, it wasn’t just the eggs,” Daisy reveals. “There were loads of things going on, so when the show had edited to show primarily the eggs, I laughed so hard because I didn’t realize it was so concentrated on the breakfast and the eggs at the time.”

“It was frustrating because it wasn’t that her food was bad, it was just that they were getting the wrong stuff,” she says. “I was worried.”

One thing Daisy didn’t really have to worry about, though, were her stews, Dani Soares and Alli Dore, who have proven themselves to be two of the more capable interior crew members in the entire Below Deck franchise. Their personal lives, however, are a little more complicated than stews who came before them, with both Dani and Alli entering friction-inducing boat-mances. Dani started hooking up with deckhand Jean-Luc Cerza Lanaux. Their current relationship status is unknown, but Dani recently revealed that she’s very far along in a pregnancy, making many viewers jump to the conclusion that Jean-Luc (AKA “JL”) is the father.

“I mean, I don’t know who the father is,” Daisy admits. “Dani’s the only one who knows that. Whether she in time decides to come out with that, I honestly have no idea.”

“I’m sure she’s sick of explaining to people or doing whatever she’s doing,” she adds. “So, for me, I just ask her if she’s OK, and that’s about as far as my interrogation goes. Yeah, I don’t know. I suppose just them being healthy is the main thing, and whether it’s JL’s baby, I don’t know.”

Adding fuel to the fire is the fact that, in the midseason trailer, Dani tells JL, “Let’s have sex tonight and if I get pregnant, that’s God’s will!” Then there’s Alli and Gary’s love triangle with deckhand Sydney Zaruba. Gary and Sydney hooked up first, with Sydney becoming instantly attached to her boss. Gary quickly set his sights on Alli, though, informing Sydney he’d rather just be friends — a message that did not sit well with the Florida native. At one dinner, she opined to Daisy about why she was “the better catch.”

“I think, being the pandemic, being on a small boat, all these things, I think, played a factor to an extent,” she says. “This is a very short amount of time for something to have escalated to such an extent that it did, but it did happen quite a while ago, so I’m hoping they can all laugh about it at now.”

Emotions ran high in the confines of Parsifal III in corona-times, with Sydney accusing Alli of purposefully not washing her work clothes. It’s an attack that Daisy says simply didn’t happen.

“There’s absolutely no way,” she declares. “First of all, Sydney went through a lot of shirts. We were given three shirts [and] if you’re going to change your shirt three times a day, you’re not going to have a clean shirt. It sucks. You’re up on deck. It’s hot. You’re sweating. That’s not our problem.”

“There’s no way Alli did that on purpose,” she adds. “All three of us took responsibility for the laundry. It just happened. Alli was in there a little bit more because she’s junior, and it also happens that laundry is, especially crew laundry is, the least important thing going on that trip. It always suffers. It’s always the department that suffers. I had a clean shirt on a clean skirt for the whole six weeks.”

There are still about three weeks of misadventures left to watch in the second half of Below Deck Sailing Yacht‘s second season, which brings an all-female charter that Daisy says rivals that of Barrie Drewitt and his family (viewers will recall Barrie as the man who came on board with his ex-husband, their respective new partners — including Barrie’s boyfriend-turned-fiancé who was formerly his daughter’s boyfriend — and their gaggle of children). One of the women in the upcoming group is Erica Rose, of The Bachelor fame. 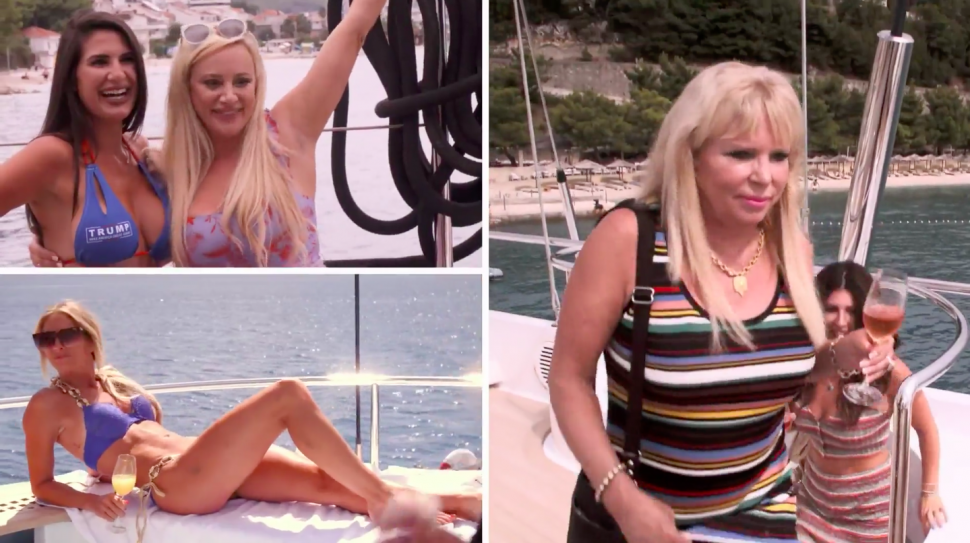 “I also did see with all the guests — not just these two groups — a lot of heated arguments, drunken moments, that you don’t see that didn’t make the show,” Daisy shares. “I think the pressures of COVID, I think the pressures of a lot of alcohol, sometimes the dynamics were a bit weird. … Maybe they wanted a bit of TV time, but I also think that there was actually quite a bit of real, genuine drama there, as well.”

Daisy has a dramatic moment of her own when a charter full of fellow yachties comes aboard for a trip, declaring it in the trailer, “the lowest point of my career.”

“It turns out it wasn’t,” she cracks. “I think I was a bit dramatic. Imagine me, being dramatic.”

“I’m not going to lie, as every episode goes on, I’m always like, ‘Is this the moment I say something that I might regret or do something I regret?'” Daisy says. “But my whole life I’ve always been like Marmite, you either love me or you hate me. … I’m not everybody’s cup of tea, but that’s OK. As long as I stay true to myself, which I did.”

Daisy, who was a fan of the franchise — and chief stewardesses Kate Chastain and Hannah Ferrier — before applying to be on it, says the biggest shock of the entire Below Deck experience was just how easy it was to forget the cameras were there.

“I really did think like, ‘Oh, I’ll be paranoid with the cameras,’ I was quite worried I wouldn’t be able to be myself, that I would be conscious about what I was saying,” she reflects, “but, no. I mean, it’s very smart what they’ve done. We’re way too busy to be able to think about anything else than our jobs, and that’s why the drama happens, as well, because it’s just so intense. It’s so high energy, you have a lot of big personalities — which usually wouldn’t have in a work environment. You’d have a few quiet ones, live ones. This is like everybody wants the floor. Everybody wants to say their piece. That was probably what surprised me the most.”

And now that she knows the game, she’s down to come back and play again for a potential third season.

“I enjoyed the experience,” she says. “I felt lucky to be part of it and to have people believe in me the way they did and to challenge myself. I felt like I rose to the challenge, so for me, I had a really positive experience. I know not everybody comes out with maybe as good of an experience, but for me, I thought it was great.”