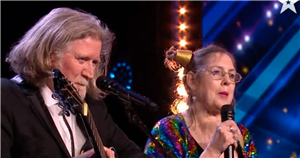 Britain's Got Talent fans were left in awe as comedy duo Brian and Krysstal took to the stage during Saturday night's show.

Fans were unsure what to expect when the pair appeared on screen, but it quickly became clear that they were a comedy duo, and they instantly impressed viewers with their hilarious performance.

However, it wasn't just Brian and Krysstal's unique act that got fans of the ITV show talking, as many were left in shock when Krysstal's real age was revealed.

Brian told he judges he was in his late sixties, before Krysstal said that she is 71 – leaving the audience and viewers in disbelief.

Do you love celebrities, fashion, home interiors and beauty? Then do not waste another minute of your time and sign up to our daily newsletter, where you will receive all that – and more – straight to your inbox at 5pm every day.

From exclusive at home tours, cleaning hacks, the latest in beauty trends – and of course, all the latest celebrity gossip, look no further.

Pop your email address in the box at the top of this article, and et voila! Enjoy

Get exclusive celebrity stories and fabulous photoshoots straight to your inbox with OK!'s daily newsletter

Many took to Twitter to chat about the comedy duo's performance, but others were quick to comment on Krysstal's surprising age.

One person wrote: "Crystal looks incredible!! I would take at least 15 years off her age. What creams is she using?? #bgt".

Another viewer hilariously wrote: "I appreciate the ones that are bonkers tbh. Plus she looks so good for 71! #BGT".

Krysstal was musician Brian's "assistant", but it wasn't long until she started to show off her own musical talents, as she humorously started playing multiple different instruments.

He was quick to press his buzzer, with Brian and Krysstal admitting that they knew he wouldn't be a fan of their performance.

They received a firm no from Simon, but Amanda, Alesha and David were quick to send them through to the next round regardless.

For all the latest gossip and news about Britain's Got Talent, sign up to our daily newsletter here .