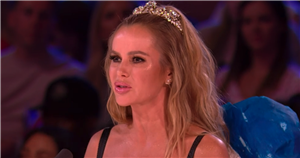 Britain's Got Talent viewers were left speculating whether the whole show was live after a large skating ramp was built on the stage.

During the latest episode, Scooter Boys took to the stage to perform their whirlwind act for the live semi-finals.

However due to the fact that large ramp was installed on the stage in a relatively short space of time, fans were left questioning whether the show was in fact live or whether Scooter Boys were already pre-recorded.

To make things more confusing judge Amanda Holden viewers that it was live.

One person wrote: "So were The Scooter Boys performing 'Live' or pre-recorded? Ant & Dec said it was pre and Amanda said 'Live'. Which one was it?"

Another said: "Ant and Dec: this is pre-recorded due to size of stage. Amanda: this is live tv."

A third wrote: "I think they were pre-recorded because they wouldn’t be able to more their set on and off stage in time if it was live and would have delayed the next act or mess up the timing of the other acts."

While a fourth added: "I’m confused, why isn’t this live? They can’t have done it too long ago because the audience is all there so, was it just filmed an hour earlier in case there was serious injury or something?"

During their auditions, one of the young lads from Scooter Boys fell over but got straight back up to join the rest of his co-performers.

On Friday night's show another small accident happened as another member fell down again at the start of their act.

Jumping on Twitter fans complemented the young lad while many viewers also said how impressed they were with their overall performance.

One person wrote: "I certainly couldn't do that without breaking several bones. Fair play to them."

Another said: "I officially want Scooter Boys to go through on #BGT I also want Tyler to become Prime Minister. Mate, he is outstanding!"

A third echoed: "Best thing about Scooter Boys is their branding. I want the jumper. I want the helmet. Where is the online store?"