Too bad Axe didn’t show up on the Season 6 finale of Showtime’s Billions Sunday because that would have been exciting.

Instead, viewers had to watch the same Chuck and Prince tit for tat the money drama’s writers have been foisting upon us all season long with little to no payoff. This time, Chuck tried to blackmail Kate, used a fake warrant to confiscate one of his cryptocurrency storage boxes, and did a bunch of other illegal stuff to take down Prince.

The billionaire had his own tricks, but had to focus on both ruining Chuck, professionally, and neutralizing his sexual indiscretions with Rian. The latter was especially anticlimactic because Rian didn’t want money, but also didn’t want to ruin her boss’ chances at the White House. In the end, the incident brought Rian and Taylor closer together, but even that felt fruitless.

As for the whole Chuck thing, Prince was so hellbent on making the former New York attorney general look like a fool, that he flushed $3.5 billion down the drain as a Dave and Chuck’s crypto hacker tried and failed to crack the boxes’ code. After 10 failed attempts, all the money on each digital storage box (Dave legally commandeered more) disappeared. 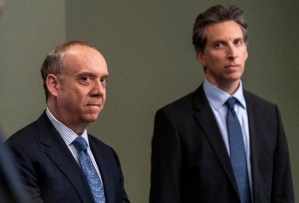 Prince tried to pretend not to care, but just before he got on the elevator, Dave saw his knees buckle and she knew Prince was guilty of not paying taxes on his bitcoin just as Chuck had said. Chuck still got arrested and had to go to jail despite what Dave knew. However, it was all for show because she busted him out a short time later.

At least Dave loves what she’s doing and is coming up with new ways to work with Chuck to put a stop to Prince’s presidential aspirations. Chuck is convinced Prince is a lot like Dead Zone‘s Greg Stillson, and he’s convinced he will find “the baby” Prince will hold up to proverbially shield himself. Judging from the finale, that symbolic baby might be Rian, but who can say?

Meanwhile, Wendy, Wags, Kate and Scooter (or maybe just the actors playing them) looked completely bored. Even when Kate faked out Chuck and made him think he had enough dirt to blackmail her, the reveal was lackluster, and her victory was short-lived because Prince still lost his money and Chuck spent very little time behind bars.

Here’s hoping Season 7 has more definitive victories and losses because at this point, the triumphs are so Pyrrhic and predictable, it’s criminal.

What did you think of the Season 6 finale of Billions, and were you satisfied or disappointed? Grade the closer in our poll and drop your thoughts in the comments.