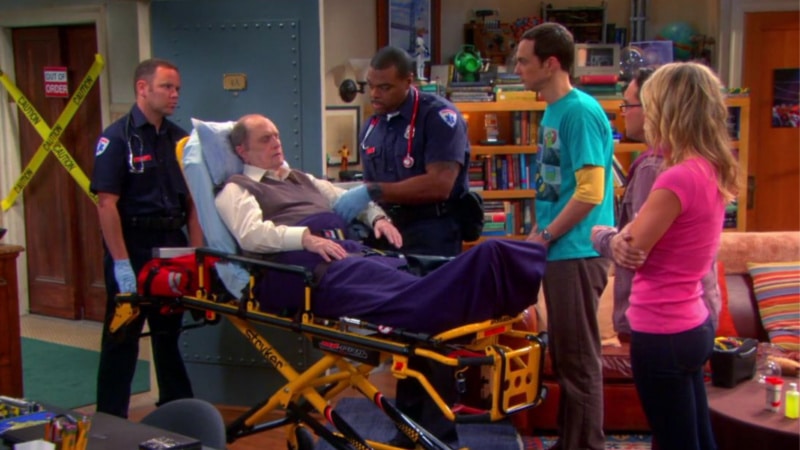 In tonight’s episode called The Planetarium Collision, Amy, played by Mayim Bialik, doesn’t have time to work on super-asymmetry, something Sheldon, played by Jim Parsons, isn’t thrilled about.

He will go to great lengths to ensure she’s available, even if it means potentially causing problems for her at work and in her career. Meanwhile, Koothrappali, played by Kunal Nayyar, would like to host a show at the planetarium without the help of Wolowitz, played by Simon Helberg.

In the episode description, it’s uncertain what role Arthur Jeffries will play in the storyline, but Parsons did offer up some hints. It sounds like he will give hilarious marriage advice to Sheldon as they dine together in his dreams.

“Bob’s back to offer advice because when you have marital problems, you go to Bob Newhart in Jedi robes,” Jim said in a video, according to Entertainment Tonight.

Newhart also said about the episode: “I’m kind of Obi-Wan – whatever that means. Whenever Jim has a problem then he comes to me. He and Amy had a fight and he came to me and wanted my advice on how to handle their first fight.”

Throughout The Big Bang Theory’s 12-season run, Bob Newhart has been on six episodes. While he returns for tonight’s episode, it’s uncertain whether he will appear on future episodes, as the show wraps up its final season.

Newhart also made an appearance in the pilot for the spin-off show, Young Sheldon, back in 2017. Throughout his career, Newhart has appeared in The Librarians, Five, Horrible Bosses, NCIS, Elf, Desperate Housewives, ER, George & Leo, In & Out, Murphy Brown, and Newhart, where he played Dick Loudon and Robert Hartley from 1982 to 1990.

From 1972 and 1978 he also starred in sitcom The Bob Newhart Show, filming 142 episodes. He was previously awarded a Kennedy Centre Mark Twain Prize for comedy, and was nominated for a 2007 Grammy Award and an Emmy Award in 1962, but didn’t take home an Emmy Award until 2014 for his role in The Big Bang Theory.

He was born in 1929 in Illinois and he’s worked as an actor and writer for years. He’s been married to Ginny Newhart since January 12, 1963, and together they have four children.

The Big Bang Theory airs on Thursdays 8/7c on CBS.