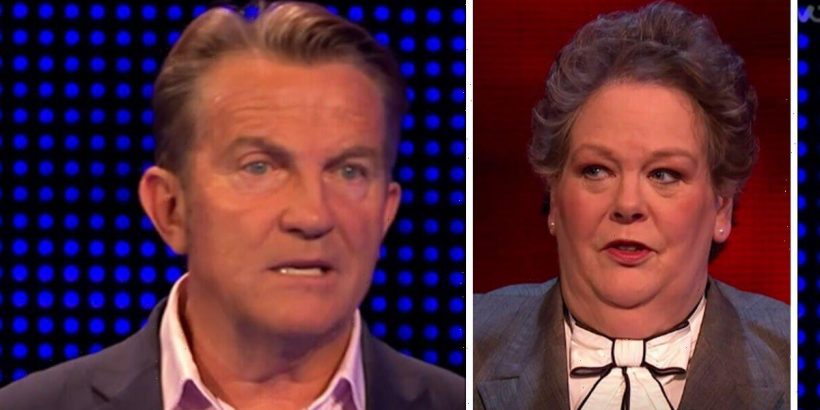 The Chase: Bradley says contestant 'fluked' her round

The Chase host Bradley Walsh welcomed four new contestants onto Tuesday’s episode of the ITV gameshow. The players, named Alex, Gita, Owen and Jas, all hoped to beat Anne ‘The Governess’ Hegerty and walk away with a cash prize. The Chaser was on top form and Bradley was completely stunned Jas was one of the only contestants to make it through to the final after a “jammy” round.

English teacher Alex was the first player to take to the stage to answer a selection of questions on the ITV show.

He raised £6,000 in his cash builder round and made it through to the final with that amount after passing on an offer for £26,000.

Gita, the second player, also raised £6,000 in her opening round but she was soon caught out by Anne.

Coin collector Owen raised £5,000 in his first round and he took the bold decision to take the highest offer presented to him and play against The Governess for a whopping £46,000.

Despite wanting to add £46,000 to the prize pot the 23-year-old was soon sent packing after slipping up on a couple of questions.

Jas, who was the last player to go head-to-head with Anne, raised £5,000 in her cash builder round.

However, she decided to play for the lowest offer which was £1,000 in the hope of making it through to the final.

Jas admittedly struggled on a variety of questions, including one about types of cheese, and had to guess multiple times.

Bradley even had to remind the contestant to press the buzzer as soon as possible as he was worried she’d “run out of time”.

She also looked at Bradley in the hope he would be able to help her out, but the host told her: “I can’t give anything away Jas.”

But luck was on Jas’ side and she eventually secured her place in the final with Alex to Bradley’s shock.

“You have just fluked your way through from start to finish.”

Bradley later congratulated Jas who was playing in the final for £6,000 with Alex.

While the pair tried their hardest to push back the Chaser and win, they were quickly caught with 35 seconds remaining on the clock.

Anne said: “[The final] was slightly better than I was expecting, however, it was not a difficult set of questions.”

Following his defeat, Alex said: “It’s been great as I wanted to play against Anne.”

The Chase continues at 5pm on ITV on weekdays.