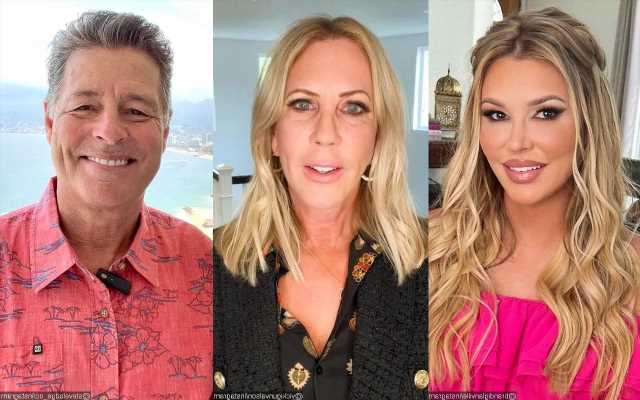 The ‘Real Housewives of Orange County’ OG and Steve broke up last September as the Coto Insurance founder claimed that she was blindsided with the fact that Steve moved out when she was out of town.

AceShowbiz –Vicky Gunvalson‘s breakup from Steve Lodge apparently makes her a real B, according to Brandi Glanville. “The Real Housewives of Beverly Hills” alum shares in a new interview that Brandi was a “b***h” on “Ultimate Girls Trip: Ex-Wives Club” due to her messy breakup with her now-ex-fiance.

“We didn’t know that at the time, so she just came in being a b***h,” Brandi tells Page Six in a joint interview alongside “RHUGT” castmate Jill Zarin. Brandi later emphasizes, “[Vicki] was pissing everyone off – maybe not Jill, but everyone else.”

Jill, understandably, jumps to her close friend Vicky’s defense. She explains, “I’m going to defend Vicki. First of all, I have a lot of empathy for Vicki.” “The Real Housewives of New York City” alum goes on to say, “We all know that Vicki has said she does not want to be alone, she cannot be alone, she must have a man. She says she’s insecure about it, she knows it’s her issue. … The day she left to come to the trip, her boyfriend moved out or broke up with her.”

Vicky and Steve broke up in September 2021, not long after the Coto Insurance founder left Orange County for Massachusetts to film “RHUGT” at Dorinda Medley‘s Berkshires estate. Vicky admitted to feeling blindsided with the fact that Steve, who was living at Vicky’s home at the time, moved out when she was out of town.

That prompted her to believe that the failed California gubernatorial candidate cheated on her. “I had no idea he was already planning on moving out when I left,” she said. “I had no idea there was another woman. He was home with me every single night.”

According to Brandi, Vicky didn’t address her romantic woes on the “Real Housewives” spin-off. While the majority of the cast didn’t know much about the drama, Jill apparently got an advance notice.

“I thought everybody knew. She had told me. I guess she didn’t tell everyone else,” Jill divulges in the interview. “But I knew that this had happened with this man, and she was a mess! She can’t control her feelings. That’s what makes her the greatest ‘Housewife’ of all time.”

“If she’s feeling like a guy abandoned her and dumped her and everything else, she can’t put the smile on and fake it. She’s not going to. She’s going to be sullen and sad and depressed – and we all had to deal with that because that’s what happened,” Jill continues.