Christ, what a year.

By all accounts and measures, 2020 until, well, now, is horror of a time that will scar across generations, a year plus some of loss and misery and despair for everyone in ways big and small. And it’s not over, as the vaccinated cruel capitalism of the global north, again and always, finds new ways to oppress and diminish the humanity of the global south.

But let’s talk about TV!

COVID-19 is an implacable dividing line for us, one that even the miasma of history texts won’t be able to dull. When the historians of the future look back on the pop culture released during the COVID-19 pandemic, they will obviously note something like “Nomadland,” a beautiful meditation on living in America’s margins as dictated by the framework of the bottom line. It absolutely deserved its Best Picture Oscar; and as a work produced before the pandemic and weighed down with accolades during, it is noteworthy for how prescient it is.

And now that we’ve moved on to the TV side of 2021 trophy mayhem — and for this Emmy season and this Emmy season only — there will be a weird blend of eligible content. Shows produced before COVID will go up against shows that had the capacity to be produced, cautiously and with limitations, during the pandemic. It must have been a tricky balance for networks to choose what to release, when — as the scars of the pandemic deepened, would series produced in the beforetimes seem tone deaf?

Netflix, for its part, opted to drop “Bridgerton” — which primarily filmed in 2019 — and gave audiences a grandiose, lush period soap opera with a budget big enough to accommodate a cast of dozens, 7,500 costume pieces and handmade rugs in every scene. (Handmade rugs! In every scene!) Was it too much, especially at a time of suffering? Absolutely not.

Yes, I am taking a big bonkers risk here, writing about a TV shows that’s fundamentally about attractive people trying to have sex with each other as though it was a form of salvation. But hear me out, because I’m not alone. 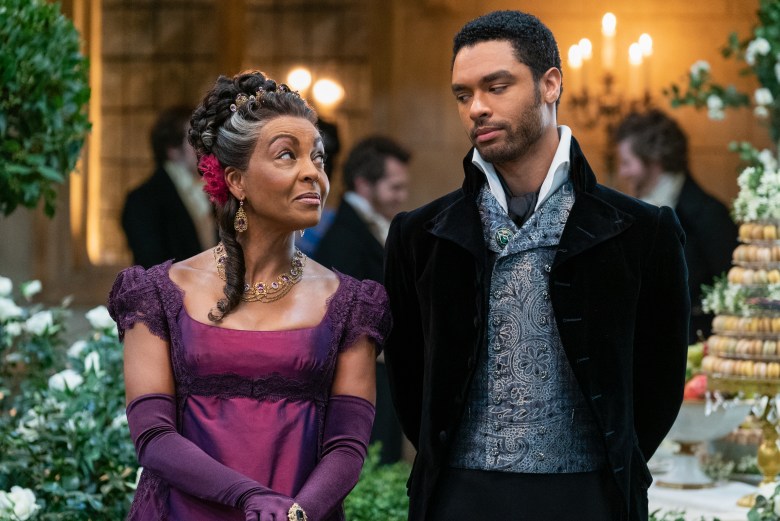 Much like the way modern eyes examine the Gatsby-fueled pink suits, short skirts, jazz music, gin joints, and bejeweled cigarette holders of the post-World War I, post-pandemic 1920s and think “Huh, society was obviously working through something” is the same light that they will also see “Bridgerton.” That something so fizzy and ebullient was released on Christmas Day 2020, with the American COVID death toll approaching half a million people, is a statement.

And it’s a statement that was fully embraced. Per Netflix’s admittedly arbitrary and impossible to validate viewership numbers, “Bridgerton” became the most-watched show of all time on the streamer. 82 million households watched at least two minutes of the show (This is Netflix’s wonky metric, not mine, don’t blame me!) in its first month of release. It has since been renewed through Season 4 — and given that Julia Quinn’s original series goes on for eight novels, the potential is there to double that.

Tom Verica, long a part of the Shondaland family as an actor, director and producer, directed Episodes 2 and 3 of “Bridgerton”: “Shock and Delight” and “Art of the Swoon.” The escapism offered by the show was obvious even before the pandemic. “I’d finish every day filming, and I’m like, ‘I just want to be in that world for a while. I want to live in that world.’ If it comes across, that’s a good thing,” he said. 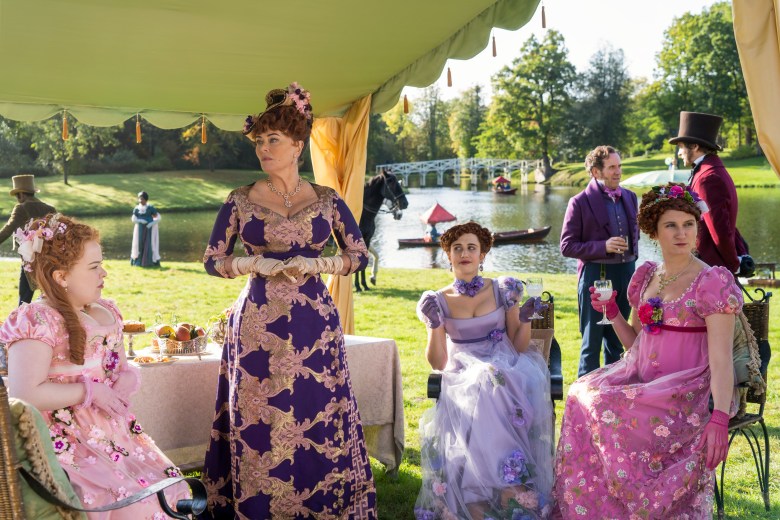 In the two episodes Verica filmed, he was responsible for helming five balls — FIVE! — as outlined in the scripts. Even for those with the most passing interest in period dramas, it’s pretty obvious that doing what is usually the defining moment in a historical piece five times over is a big lift.

“There was panic,” he said. “It was like, “Can I do this justice? How much can we do and in what period of time?” You do get that realization of the realities of production and financial limits, and what the story is asking for. You break out in a little bit of a sweat and a little bit of fear about how you’re going to achieve that. But at the same time, it’s that feeling that excites me because there are times when you research scripts where it feels very pedestrian. This was definitely not one of those times, it scared me. It terrified me.”

It’s the extravagance of those themed balls — hundreds of people packed together amid acrobats and fireworks, dressed in impeccable outre costumes created by Ellen Mirojnick and her team, and choreographed amid the bigger, better, bolder period-with-a-twist production design elements by Will Hughes-Jones — that set “Bridgerton” apart. Showrunner Chris Van Dusen’s show is a confection, to be sure, but it’s one with largesse that’s both inspirational and aspirational.

In a time of despair and with a roiling undercurrent of pain to every aspect of daily life, “Bridgerton” is a testament to the glory of distraction done to excess, to celebrating love and life and too many flowers, to pomeranians and jewels — and pomeranians in jewels — and savvy women gossiping in their finest regalia. Long may it reign.

All episodes of the first season of “Bridgerton” are available to stream on Netflix.