For generations of horror fans, the Evil Dead movies are a pinnacle of the genre — but series star Bruce Campbell surprisingly prefers the recent spin-off.

Campbell has recently vowed to retire from his iconic role as the chainsaw-swinging demon-hunter in Ash vs. Evil Dead after its cancellation, more than 30 years since he originated the darkly comic role.

In a recent interview with Digital Spy, he explained why he’s reluctant to do another Evil Dead movie on the back of the TV show’s recent successes. 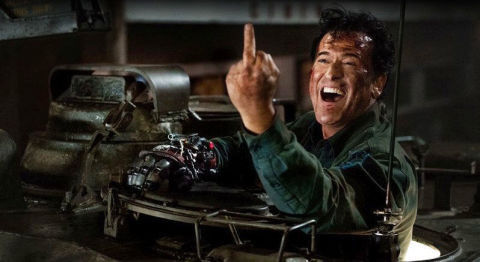 “A lot of people were clamouring for another Evil Dead movie, but it was our job to try and work out what the best format was,” he explained. “Sam Raimi was making very expensive movies at the time but Robert Tapert had just done Spartacus and I’d just done Burn Notice, so we were both in a TV frame of mind. So Robert and I talked Sam into rethinking it into a TV show.

“We thought we could tell a much more thorough story, and have much more character development, than we could in a hour-and-a-half movie. Also, the fans are never satisfied. We thought that a TV show would give us the highest chance of them being satisfied.

“And also, as we wound up on Starz, we could have unrated material, which is what most of our fans want anyway! If we did a movie, it would have been R-rated, and they wouldn’t get what they were looking for.”

Campbell was also pretty candid when we asked about how he looks back on the legacy of the original Evil Dead movies. 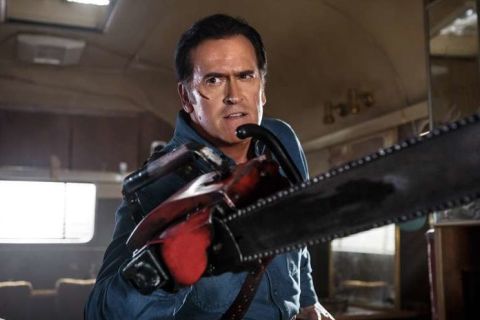 “I’ll catch ’em, because I’ll go to fan screenings,” he explained. “There’s always scenes available in various forms. I saw Evil Dead II not that long ago. It’s a really weird movie. They’re all really weird movies. Army of Darkness can be fun with a big theatre.

“But Ash vs. Evil Dead, I actually enjoy watching. I watched the dailies on set and I saw the early versions. But I look forward to seeing the episodes too. It’s easier to watch yourself when the work is better. That’s one of the reasons why it was fun to do Ash vs. Evil Dead is because I had a chance to play the character of Ash with a legitimate amount of acting experience.

“The irony of my life is that I’m probably best known for playing Ash from Evil Dead, which is the first job I ever did, where I had the least experience. So now it’s been fun to go back and re-tool that and say, ‘Hey, that was my first wood-carving. I’m a little better at woodcarving now’.”

Ash vs. Evil Dead: Season 3 is available on Blu-ray and DVD on October 22.