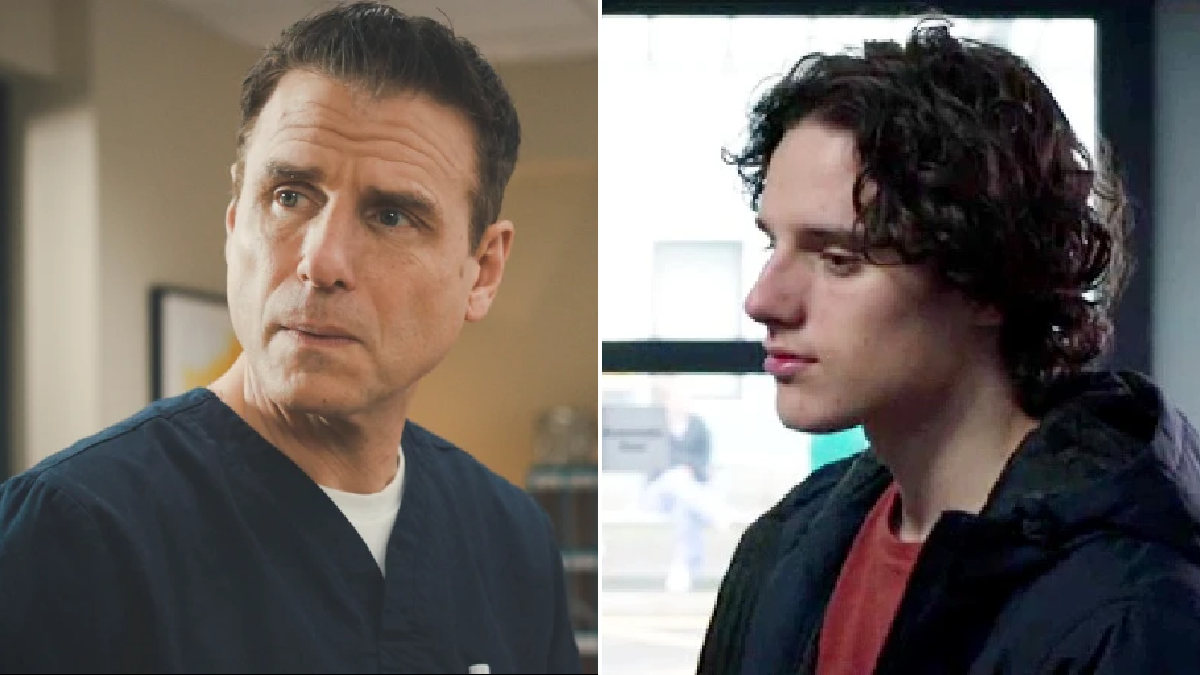 Paige (Shalisha James-Davis) and Rash (Neet Mohan)’s romance is only a week old but they proved to be a great couple both outside work and inside the Casualty department in tonight’s episode as they worked together to help a patient.

Paige started the episode by saying she didn’t want anyone at work to know about them, but that was never going to work in a staff team that includes Marty (Shaheen Jafargholi). ‘You two are good together,’ he told them as they calmly worked to stabilise a very ill patient. ‘We’re not together,’ Paige said, but Marty just rolled his eyes. By the time they got round to telling Dylan (William Beck) about their relationship they were surprised to find he already knew, too. He’s not immune to departmental gossip, apparently.

There had been a hiccup along the way, when Paige said they should call it a day. This was all because of their patient, Heather (Amanda Root), whose husband Martin (John Ramm) had died in a car crash they were both involved in. Heather couldn’t bear the pain of having survived the crash and wanted to end her life. Martin’s daughter Carla (Cathy Conneff) said something to Paige about losing people you love. So soon after Paige’s mum’s death, she realised that she couldn’t face potentially falling for Rash and then risking losing him, too. Luckily she soon changed her mind about dumping him.

Heather’s story was told via flashbacks to the accident and its aftermath when the car burst into flames after the petrol ignited. We repeatedly saw Heather drinking from a bottle, and it turned out to be petrol. Paige had noticed Heather had blisters around her mouth and wondered if she’d drunk something toxic, though no one had bothered to check the bottle or notice petrol fumes on her breath.

With no help available from the busy psych department for Heather, Rash asked David (Jason Durr) to help, and he was faced with the terrifying situation of Heather spilling petrol over the bed and then threatening to set fire to herself. David calmly talked her into not only putting down the lighter but also starting to think about the future and her unborn grandson.

David was so busy being brilliant with Heather, and just about managing his new job as clinical nurse manager, that he had little time left to spare for his son Ollie (Harry Collett), who was at the ED wanting to speak to his dad. We didn’t learn too much about what’s going on with Ollie except it involves his friend Rob (Noah Valentine), whom he described as ‘a bit intense.’ It seems like Rob is controlling Ollie, trying to turn him away from David and saying, ‘I’m the only one that’s got your back. It’s just us two now.’

Faith (Kirsty Mitchell)’s daughter Natalia (Zoe Brough) may also be falling under bad influences as her friend Georgie (Scarlett Rayner) – whose boyfriend likes rough sex, apparently – was telling Natalia not to be a ‘vanilla virgin’ any more because her boyfriend Tristan will ‘get sick of it.’ With Natalia looking not entirely comfortable with the idea of moving things on with Tristan, is she going to end up being coerced into something she’ll regret?

Dylan line of the week: advising David to get to a budgetary meeting early, ‘Unless you want to sit next to Kevin Peaslake, who eats biscuits like a velociraptor.’