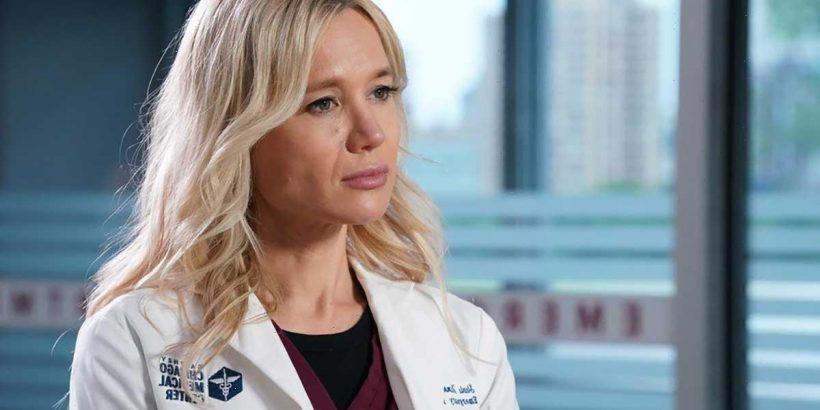 Chicago Med fans have been left emotional following the news that Kristen Hager will not be reprising her role as Dr Stevie Hammer.

But it’s a bittersweet moment as it turns out Kirsten’s exit comes amid the news that the actress is expecting her first child with husband, Matt Jones. She confirmed the exciting news by sharing a sweet black-and-white snap of her growing baby bump on Instagram.

She simply captioned the snap with a heart emoji while her husband Matt revealed on his own Instagram how far along she is. “She’s five months sober,” the actor, who previously appeared in the likes of NCIS and The Office, joked while sharing the same photo.

MORE: Why these One Chicago stars left the franchise and where they are now

Kirsten announced the news on 16 March, following her last on-screen appearance in the drama, but before it was revealed that her absence was permanent.

Kristen shared a photo of her growing baby bump on Instagram

However,  fans will be pleased to hear that executive producers Diane Frolov and Andy Schneider are leaving the door open for a return.

“We all really liked Kristen and would welcome her character coming back in the future,,” they told Deadline in a statement.

The 39-year-old actress joined the NBC medical drama, which is part of the One Chicago franchise along with sister shows Chicago Fire and Chicago PD, as a series regular at the start of the current seventh series, meaning that she has only appeared on the show for half a season.

She last appeared in season seven’s 14th episode, which aired on Wednesday 2 March 2022, and saw her character make some huge life-altering decisions.

The ER physician first reconciled with her bipolar mother before revealing that she was going to give her marriage with her estranged husband another try. As a result, she left Chicago for Michigan and, in the process, put an end to the will-they-or-won’t-they romance with Nick Gehlfuss’ character Dr Will Halstead.

Will may have a new romance on the horizon as it has been revealed that Jessy Schram, who played his former love interest, Dr Hannah Asher, will be returning to work at Gaffney Chicago Medical Center following her stint in rehab.