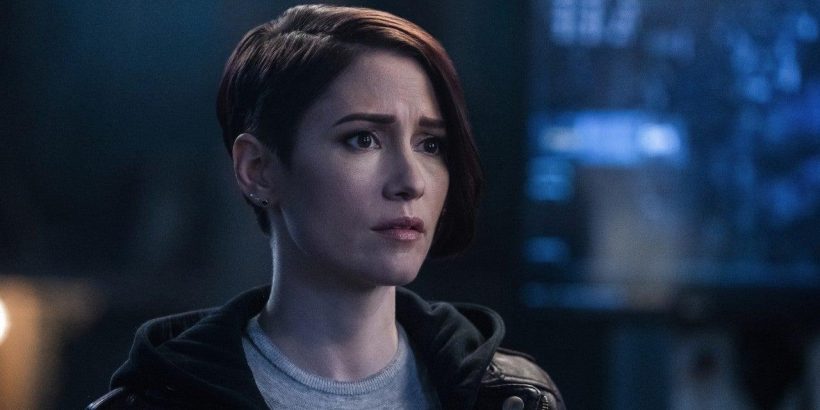 Supergirl star Chyler Leigh steps behind the camera to direct Tuesday’s episode of The CW superhero drama — and it’s not your typical hour of high-flying action. The conclusion of a two-part flashback arc set in 2009 Midvale, which turns back the dial to further explore the dynamics between Kara Danvers (Izabela Vidovic) and her sister, Alex (Olivia Nikkanen), in their younger years, picks up right where things left off. As young Kara experiences kryptonite for the first time, a young Cat Grant or “CJ” here (guest star Eliza Helm), may be the reason Supergirl never gets out of the Phantom Zone.

Directing a different kind of episode for Supergirl in its final season wasn’t something Leigh had planned necessarily. “It didn’t really strike me until I got on Supergirl that I didn’t think that I would ever not do something else in the industry,” the 39-year-old actress tells ET. “But watching the whole process and being part of it from the start of the show, just picking up on things and story, having a love for storytelling in general, I feel like I was already always directing.”

Ahead of the latest episode, Leigh discusses making her directorial debut, the final season of Supergirl and why it was “special” to finally get closure on Grey’s Anatomy in her surprise return.

ET: This week’s Supergirl marks your directorial debut. Had you been working up to this moment in your career?

Chyler Leigh: It didn’t really strike me until I got on Supergirl that I didn’t think that I would ever not do something else in the industry. But watching the whole process and being part of it from the start of the show, just picking up on things and story, having a love for storytelling in general, I feel like I was already always directing. You just learn so much, I think, from really being able to take ownership of the character, but really having to step into a realm that I never imagined I would ever be a part of something like superheroes. I had been talking to the producers, to Greg [Berlanti] and Sarah Schechter, and then Robert [Rovner] and Jessica Queller for a few seasons now, where I was saying, “Hey, this is a great opportunity. I would really love to take a stab at it if I can.” And they were like, “Oh my god, absolutely.” When they told me that I was going to be able to direct this season, and then Robert and Jessica told me that it was going to be a Midvale episode two-parter, I was just like, “OK, this is awesome.”

This isn’t your typical episode of Supergirl too. You’re directing actors who are playing younger versions of your characters.

First of all, the girls are just phenomenal. They have done such an incredible job over the years, of really picking up even the smallest nuances about each of our characters, but also the dynamic between Kara and Alex. They’ve just been stellar. There’s a scene in a minivan where they’re talking before Kara goes into the prom. They just did it. They naturally have that chemistry. There were a couple of little things here and there, where I maybe made a suggestion. I actually took pictures of the monitors and I sent it to Melissa [Benoist] because I was like, “Look at this.” And it was just still frames of them. But they looked… they were identical. She hit me back right away and she’s like, “That is uncanny and absolutely amazing.” I was like, “You have no idea.” Watching these two, it’s like looking into some sort of crazy mirror realm world. It’s like, what is this witchcraft? It’s awesome. 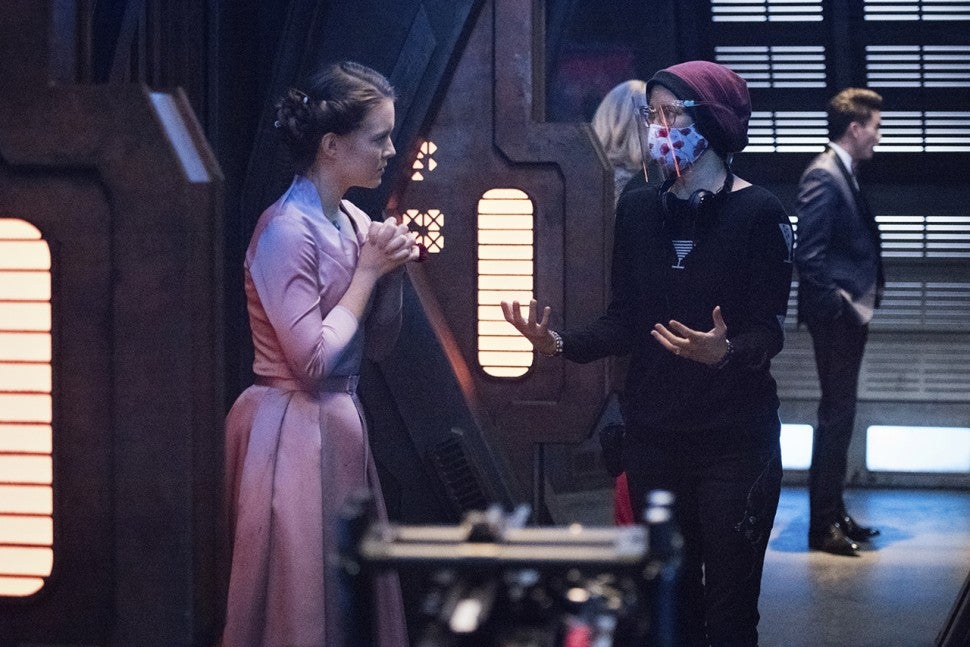 It must have have been a trip for you to make your directorial debut on an episode like this.

It really was. What I loved so much about it was the fun that everybody had. Knowing that I’ve been on the show since Day 1, I know it inside and out. For the girls, they just kept saying, “This is such a trip. We’re so grateful.” And I kept saying that to them, “I’m so grateful,” because I never got to work with them. Except I worked with Olivia in the episode where Alex takes on the Supergirl role, which was so much fun as well. There is a moment where they’re trying to stop Kara from going out and giving herself up. And it was a scene when they’re in a storage room, and she’s already been hit with that kryptonite and she’s weak. She stands up and she’s telling them basically, “No, I’m going to make this decision.” I told Bella, “Hey, this is a moment for you, for the first time for the audience to really see you stand like Supergirl. So square off, hold your body, hold your fist tight. Square off and stand up.” And even if maybe then Kara didn’t even know she had it in her yet, but the little moments, where it’s winks to the future, that I got to pick out and say, “Hey,” I didn’t even notice it until we were in the scene. “This is such a great opportunity to do this here. Let’s see if any of the viewers pick up on it.” That made it so much more fun for them too, to be able to be a part of what really is the future and what we see now as Kara and Alex.

It’s bittersweet. There’s obvious reasons for the show to be the final season. But at the same time, I still feel like Alex has so many more stories to tell, but I think that by the end of it, it’ll be a pretty good wrap-up without that sense of, “Now this is their life.” It’s going to be a “to be continued” kind of thing. It’s understanding that, OK, they’ve reached a certain point in their life where it’s almost like the audience can hopefully give them permission to imagine them having some time to be happy and it not be dire straits all the time. There’s always going to be bad guys. But my hope is to be able to see more of those moments, where they can find a bit of joy amidst the chaos, which they do. But obviously, it would be cool to have more of that. And we have so many of our actors, so many of us, that are finally now really in all these scenes together, which has been so much fun. It’s just been great to mix things up here and there, and [explore] different dynamics between everybody. So I feel like it’s rounding out really well. The story that we’re telling is that you don’t have to be a superhero to be super powerful. It’s basically giving the people in National City or the people in the world encouragement that they can also be their own heroes. They can also tell their own stories and trying to empower people. That’s the goal. And I think we’re doing a pretty damn good job of that.

Briefly switching gears to Grey’s Anatomy. What was it like getting to be a part of a special season where cast members from the past popped back up throughout the year? What did it feel like being back with Ellen Pompeo and Eric Dane one more time?

Yeah. Well, it was a really interesting experience, just because I did have to film it up here in Canada because you can’t travel back and forth to the States. So all of my stuff was done on basically green screen. And we’re not sitting on the rocks. I was sitting on an apple box, and I was talking to tennis balls. So in that sense, it was interesting. But understanding there are dynamics between Lexie and Meredith, and then Lexie and Mark. It was really special to be able to be part of it and especially telling such a powerful story. The tribute of this season is really towards first responders and their experience during the whole pandemic, so to be part of that was obviously very special. And to be able to close the chapter for Lexie, and to appear in a way where she’s not eaten by wolves. Kind of bring a little life back to it… It was a special experience to be able to be part of that.

Supergirl airs Tuesdays at 9 p.m. ET/PT on The CW. For more on Chyler Leigh’s return to Grey’s, watch below.