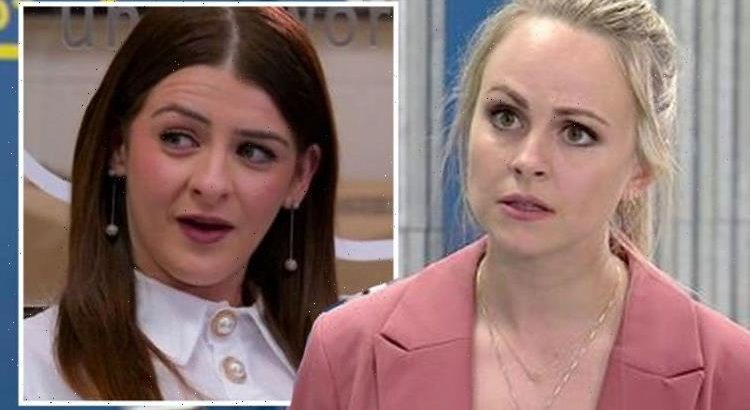 Sarah (played by Tina O’Brien) and her husband Adam (Sam Robertson) had been enjoying their marriage over the past few months, with Gary Windass (Mikey North) finally keeping his nose out of their relationship. However, in more recent scenes on Coronation Street, the mother of two has been left concerned by the fact her spouse had slept with numerous women before finally settling down. As ITV soap newcomer Lydia (Rebecca Ryan) threatens to tear them apart, she could use her charms to swoon Sarah and the pair could embark on a scandalous affair.

It’s been confirmed Lydia is a face from Adam’s past as the pair slept together many years before the lawyer married Sarah.

On-screen, this connection has not yet been revealed but it could be the cogs are already turning for Lydia to get her revenge.

The newcomer has stated she does not know anyone in the area, but this could be a lie in order to get closer to the married couple.

In Tuesday night’s episode of the weeknight serial drama, the mother of one suggested she and Sarah go and get some mulled wine after locking down a deal for the Underworld Factory.

Having done a pregnancy test, which came back negative, the mother of two agreed and by the end of the instalment, they seemed to be best friends.

“Thank you so much for the mulled wine,” the newcomer remarked, with Sarah replying: “Nothing says Christmas better than warmed up plonk with fruit in it.”

“We have to do this again, sometime,” Lydia demanded, adding: “Because I am new to the area and I’m a bit of a no-mates at the minute.”

“Not anymore, baby,” Sarah said, assuring the businesswoman they were now best friends forever before asking if she had any family in the area.

Lydia explained she did have a young son, who had just started at the same school as Sarah’s boy, with the latter baffled by what “a small world” it seemed to be.

Not long after, Lydia left her new friend to it as she prepared to get in her taxi and she briefly crossed paths with Adam.

While Adam had no idea who she was, Lydia seemed to give him a scowl, hinting she remembers their past very well.

In upcoming scenes, Sarah will learn the truth about her new friend and her husband, shocked to discover their have a romantic history.

Despite one of her spouse’s former lovers turning up, Sarah will still want to get to know the newcomer a little better.

She will do some digging to try and unearth what really went on and how long the pair were seeing each other before they parted ways.

Though, Lydia could be using this close bond with Sarah to build chemistry with her so the mother of two begins developing feelings for the newcomer.

As Sarah begins to question herself, and with her husband supposedly being a closed book, she could start to lean on Lydia for emotional support.

With one thing leading to another, it might not be long before the two women end up in bed together and begin an affair.

This would be a huge betrayal on Sarah’s part, given how much she has berated her spouse in the past over his mistakes.

However, she might not realise she is being manipulated by Lydia and is completely under the businesswoman’s spell.

Could this be the end for Sarah and Adam as the lawyer is unable to forgive his wife for betraying him in the worst way?

Sarah has never shown any interest in a woman romantically but this could show the depth of Lydia’s manipulation and control.

She could work it in a way that it was Sarah who wanted to pursue something romantically with the newcomer and get Adam on side.

Once she has the lawyer where she wants him, the newcomer could swoop in and claim him all for herself so they can be a couple.

At this point, Sarah could realise she has been tricked into betraying her husband but is unable to make him believe her version of events.

Will she have the fight in her to expose Lydia or will she let the couple drift off into the sunset?

It seems viewers of the show are keen to see more of Lydia and the actress who plays her, former Waterloo Road star, Rebecca.

@RebeccaRyan1 back on my screen making her debut in tonight’s first #corrie, can’t wait to see what’s coming up with Lydia.”

Justin posted on the social media platform: “Lydia has arrived and welcome to the Cobbles @RebeccaRyan1 #Corrie.”

Michelle added: “What a brilliant casting she is Star-struck. She was fantastic in Shameless, Casualty and Waterloo Road.”

“Brilliant!! I hope Rebecca stays in Corrie long term. Brilliant in everything she is in and always a pleasure to watch. Great actress,” Dave remarked.