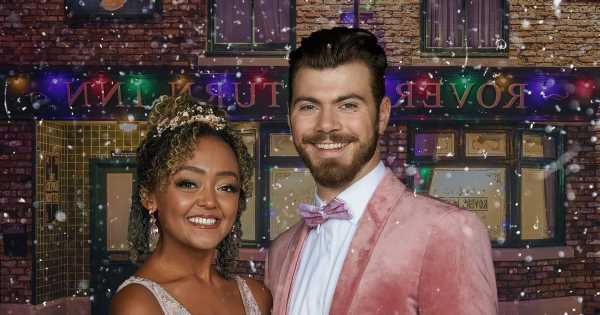 As the blushing bride gets ready to marry her fiancé, she is still unsure whether she’s doing the right thing.

However, Curtis enquires about flights to flee Weatherfield.

Steve McDonald (Simon Gregson) reveals to Amy Barlow (Elle Mulvaney) that he gave Curtis his bank card to transfer the charity money but the charity never received it.

A nervous Emma waits for Curtis at their wedding venue. Has he done a runner?

Curtis has been hiding the fact that he is not actually ill after telling everyone including fiancée Emma that he is dying.

He suffers from a factitious disorder, a mental health condition which drives the sufferer to make up – and sometimes believe – symptoms.

Fans will have to wait and see if the couple head into the new year as man and wife.

Also, Tyrone Dobbs (Alan Halsall) is faced with a huge bombshell this Christmas.

As Tyrone and his grandmother Evelyn Plummer (Maureen Lipman) prepare their Christmas dinner for two, they’re interrupted by the arrival of Fiz with the girls.

Tyrone’s thrilled to realise she cancelled the holiday, even if it does mean spending the day with Fiz's new man Phill Whittaker (Jamie Kenna).

However, When Fiz drops the bombshell that she wants to sell No.9, Tyrone’s shocked.

The mechanic asserts the house is rightfully his and he’s not selling it but as Fiz explains to Evelyn that Tyrone’s ruined her happy memories of No.9 and she needs a fresh start.

Evelyn tells Tyrone it’s his duty to do right by Fiz and the kids and if that means selling the house, so be it. Will Tyrone agree?

Elsewhere in Weatherfield, Fed up of Adam Barlow's (Sam Robertson) reputation as a ladies’ man, Sarah Platt (Tina O'Brien) questions him over how many women he’s actually slept with.

After a successful meeting with Gavin’s PA, Lydia (Rebecca Ryan), Sarah invites her for a drink. Seeing Adam, Lydia glances at him with recognition.

Sarah meets up with Lydia and her son, Finn, and introduces them to Adam.

Lydia pales and alluding to the fact that she had a relationship with him at uni, makes her excuses and leaves.

Under Sarah’s steely gaze, Adam admits his relationship with Lydia was years ago and he can’t really remember. Sarah’s unimpressed.

Adam and Sarah row over his past infidelities but suddenly Sarah’s phone beeps to remind her she’s ovulating. Sarah drags him home.

Coronation Street airs Monday, Wednesday and Friday on ITV at 7.30pm and 8.30pm