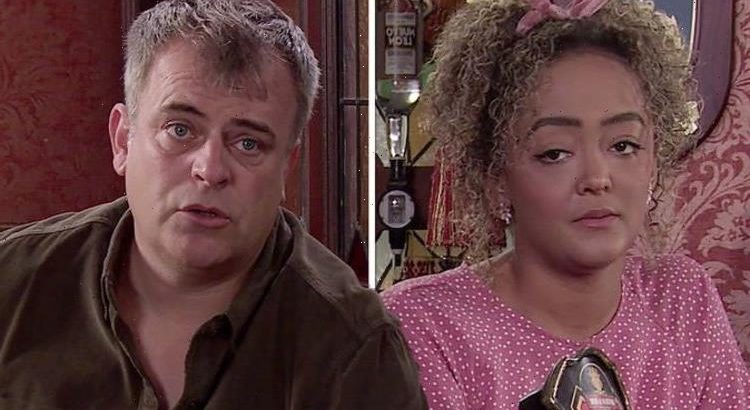 Coronation Street viewers have been watching Emma Brooker (played by Alexandra Mardell) go through a difficult time in recent months as she comes to terms with the fact her boyfriend Curtis Delamere (Sam Retford) has an incurable heart condition. As Emma struggles with her emotions, she could soon go to extreme measures to get Curtis medical help. According to official ITV soap spoilers, she’ll soon attempt to get money so Curtis can see a private consultant. But, how far will she go to get the cash she needs? Could Emma end up stealing from her own father?

In upcoming scenes, Emma fawns over Curtis, impressed with the way he went to people’s aid and knew exactly what to do.

Curtis enjoys the flattery and reveals he’s agreed to do another shift at the hospital this evening.

However, this sparks concern in Emma as she worries he’s taking on too much work.

Later on in the salon flat, as Curtis runs his hand through his hair, a large clump falls out.

In a bid to reassure a shocked Emma, he explains it’s just another side effect of his illness.

Taken aback by what she’s seen, Emma is left heartbroken for her suffering boyfriend.

She later confides in her dad Steve McDonald (Simon Gregson) how worried she is about Curtis’s condition.

Detailing Curtis’ side effects, Emma asks Steve if he’d lend her the money from Oliver Battersby’s (Emmanuel and Jeremiah Cheetham) fund to allow Curtis to see a private consultant.

However, she doesn’t get the answer she wants as Steve gently explains that he can’t release Oliver’s funds for Curtis.

He tells his daughter people handed over their money in good faith and it would be illegal to use it for Curtis instead.

After having her request declined by her dad, Emma’s left feeling deflated. How will she get the money?

As she’s desperate to get medical help for Curtis, could Emma end up taking matters into her own hands?

Would she be willing to betray her own family and steal the money from Steve?

Alexandra Mardell, who plays Emma in the soap, recently opened up about her character’s difficult situation.

Chatting about the heartbreaking storyline in an interview, the actress said: “Emma’s been putting on a show because she initially told Curtis that she could deal with this.

“In front of him she wants to be as strong as possible so she can support him, but inside, she’s distraught,” she explained.

Speaking further about her character’s relationship with Curtis, Alexandra remarked: “It’s fair to say that Emma’s not necessarily been lucky in love this time around either.

“This situation is going to get really, really complicated for both her and Curtis,” she revealed.

“Emma is really compassionate and empathetic, but this is going to test her much more than she ever anticipated,” the soap star told Digital Spy.

Could this be another sign that Emma’s emotions may tip her over the edge, causing her to take extreme action?

Although Curtis’ condition means he could have a normal lifespan, there’s also a risk his life could be cut short.

After he collapsed in the Bistro last month, Emma’s concerns for her boyfriend’s health have increased.

Will she really end up stealing from Oliver’s fund in a bid to help out Curtis? And if so how will Steve react?