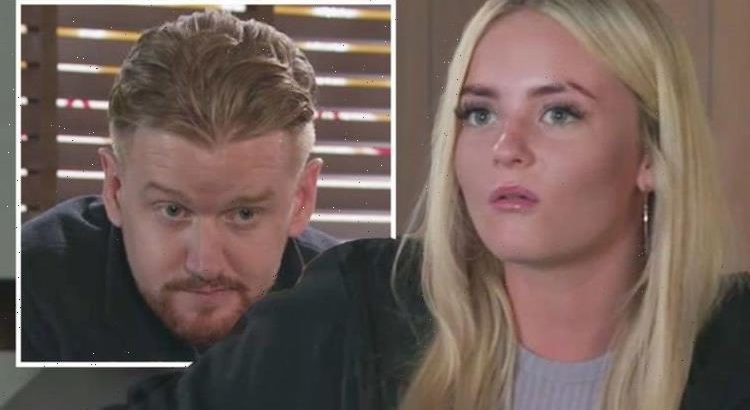 Gary (played by Mikey North) has been on the path of redemption over the past year on Coronation Street, trying to make up for the wrongdoings he committed during his reign as a supervillain. One such crime was murdering loan shark Rick Neelan (Greg Wood), which only a select number of people know about including his wife, Maria Connor (Samia Longchambon). However, Tuesday’s episode of the ITV soap saw him make a possibly dangerous move with Kelly (Millie Gibson) which could have serious repercussions in the not-so-distant future.

The episode began with Kelly struggling to find a new home after being turfed out by Dev Alahan (Jimmi Harkishin) for taking drugs.

Believing she was going to go back to living in shared accommodation with a bunch of strangers, she wasn’t feeling too optimistic.

When Gary got wind of this, however, he wanted to help as he still feels guilty for killing her father, who she desperately wants to find.

Some of the other things Gary has done for the youngster to cleanse himself of his sins include paying for her school tuition fees and helping her get away from her wayward mother, Laura Neelan (Kel Allen).

By the end of the instalment, the businessman’s plan came together as he managed to get Maria on board with it as well.

As well as giving her the job back at the barbershop, Gary and Maria asked the youngster if she wanted to come and live with them.

Although they already have one child living with them in Maria’s son, they thought they would be able to keep a closer eye on her if she lived under the same roof.

As she left the café to go and pick up her things, Gary realised it wasn’t going to be easy for his wife to take on another youngster.

“What, having a drug user move in with my 12-year-old son? No, [I’m not pleased],” she remarked, with her husband replying: “I can’t just abandon her.

“If we can just put her back on her feet…” he continued but Maria interjected as she said: “What? It will wipe the slate clean?”

She’s going to be more messed up than ever

“That’s not why I’m doing this,” Gary hit back, but his wife was still confused as she asked: “Then why are you doing it, Gary?

“You’ve done some really daft and dangerous things in your life but this, this is up there. If she finds out [you killed Rick], she’s going to be more messed up than ever.

“And you’ll be going inside for a long, long time so please forgive me if I’m not nipping over to Dev’s for a bottle of bubbly.”

It seems Gary has a lot to think about and it will be harder than ever for him to try and keep his killer secret harboured.

As Kelly moves in with the couple and becomes closer to them, she could start to break down their walls and feel a lot more comfortable with them.

However, she also has the capacity to overhear a conversation between them now she is living in the same house and this could cause trouble.

If she hears it was Gary who was responsible not just for Rick’s disappearance, but his death, she will be gunning for revenge.

As the penny drops, instead of calling the police on the businessman, she could take action and take an eye for an eye.

After months and years of keeping his secret harboured, will Gary’s time finally be up as he is killed by the daughter of his victim?

Or will he be able to talk her around and explain just why he had to kill the loan shark?

The actress who plays Kelly, Millie, has also spoken about how she thinks her character will react when she discovers the truth.

Speaking with Express.co.uk and other publications, the soap star explained: “If she did find out the only way I can see her dealing with it is she has a sort of mindset of well, [these people] who are my blood have treated me [like rubbish] through these years.

“This is all the stuff I’ve been through and the people that aren’t even in relation to me are the ones that have helped me out of it most of the time.

“All those amazing people that have helped us through my life that aren’t any relation to me [when my parents were nowhere to be seen.”

Millie continued: “So I think if she found out that her dad was dead, she’d sort of kind of think well he wasn’t watching us anyway.

“But I just think in this point of time, it would really push her over the edge but we will just have to wait and see.”

It is not known if this is the beginning of a very dangerous catalyst that is about to explode or if Kelly will never discover the truth.

But secrets don’t stay harboured for long so if she doesn’t find out about her father living under the same roof as his killer, she will find out one day.