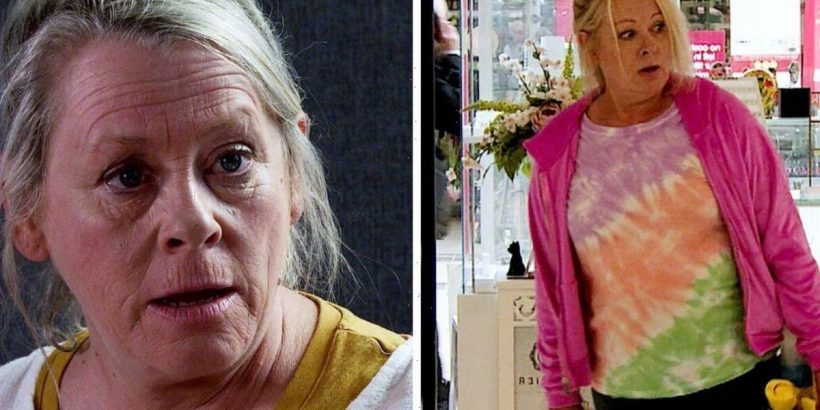 Coronation Street: Bernie gets stitched up by Fern

Bernie Winter (played by Jane Hazelgrove) couldn’t believe her eyes when she met Fern (Gabrielle Glaister) who looked just like her. The pair began to have fun with it at first, however, things took an unexpected turn in Coronation Street when Fern stole items from a jewellery shop while pretending to be Bernie.

Fern was left alone in the shop while dressed in Bernie’s clothing.

She then decided to rob the shop and exited out of the back door after stripping off her Bernie outfit.

Later on, Bernie was approached by a police officer who arrested her on suspicion of theft.

Bernie was left so confused and during the police interview, the realisation sunk in when she saw Fern pretending to be her.

Despite protesting her innocence, the police officer didn’t buy Bernie’s story, and now she is looking at jail time.

“I’ve never worked in a jewellery shop, I don’t know what you’re on about,” a fed-up Bernie said.

The police officer replied: “We have your employment records here. This is your name and address, isn’t it?”

“Yes, yes it is,” Bernie explained before being shown the CCTV footage.

“You can show me what you want, darling. I am telling you I was working this morning, I was home this afternoon and then I went to the pub.”

As the footage started to play, Bernie insisted: “That’s not me.”

“It certainly looks like you,” the officer replied before Bernie argued: “It’s my doppelganger.

“That’s a woman that looks like me called Fern.”

“Right? So your response to the evidence shown, a woman who looks like you with the same name, same address,” the officer quizzed.

Bernie hit back: “She set me up, she was who I was waiting for at home.”

Despite Bernie insisting it wasn’t her, she was kept in the police station overnight.

In upcoming scenes, things could end up getting worse for Bernie, when she tries to impersonate Fern.

In official spoilers released by ITV, Bernie opens a letter and it’s the date for her plea hearing.

Bernie is hellbent on clearing her name and intends to track Fern down at the country club.

Bernie dresses up as Fern and tries to dupe the receptionist into revealing Fern’s home address but to no avail.

However, Bernie’s plan ends up backfiring when a club member approaches her.

When Bernie makes out she’s Fern Lindon, Howard shocks Bernie by telling her he is Fern’s ex-husband.

Bernie goes on to explain to Howard that Fern framed her for a robbery.

Howard confirms Bernie’s suspicions that Fern’s a con artist. Bernie begs him to help her, but what will he decide to do?