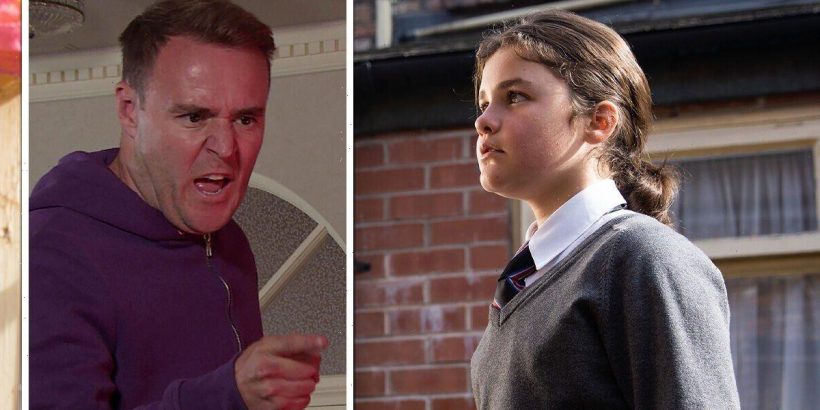 Hope Stape (played by Isabella Flanagan) may turn her back on Fiz Stape (Jennie McAlpine) and Tyrone Dobbs (Adam Halsall) on Coronation Street after her mother’s private life with serial killer John Stape (Graeme Hawley) gets unravelled for all of Weatherfield to see. Will Hope forgive Fiz and Tyrone for not putting a stop to the details about her murderous father being published?

Coronation Street spoilers have revealed Fiz meets up with the publisher of a book about John and she asks for Hope’s name to be removed from it.

However, Tyrone later finds a leaflet advertising a Q&A session about the book in question.

A curious Tyrone decides to go to the hotel room where the Q&A session is in full swing.

Things take a turn for the worse when the journalist hosting the session suggests that Fiz was complicit in her husband’s crimes.

Tyrone sees red, climbs on the stage and slaps the journalist round the face in a moment of utter rage – the hotel’s manager then calls the police.

Fiz soon learns Tyrone’s been arrested for assaulting the journalist behind the book.

She begs him not to press charges against Tyrone – which thankfully pays off.

Officers release Tyrone without charge and reveal to him Fiz has talked the journalist around.

Back at home, Fiz explodes at Tyrone as the pair have a blazing row.

Fiz shows him a video of him punching the journalist and tells him it’s gone viral and as a result, they’ve brought the book’s launch date forward to the end of the week.

Adam Barlow (Sam Robertson) informs Fiz and Tyrone he has spoken with a lawyer who specialises in libel but there is no guarantee they’ll win and their costs alone will be £100k.

A deflated Fiz and Tyrone have to break the news to Hope the book will be published as they could not afford to prevent it.

The youngster lashes out at the pair and rails at them for not protecting her.

Later on, the police call after explaining they have received complaints about the video and officers arrest Tyrone on suspicion of assault.

Chesney Brown (Sam Aston) soon learns about Tyrone’s arrest and Hope tells her mum she wants to stay with Chesney. Is their family falling apart?

In a bid to protect Hope, Tyrone buys all the stock from the local bookshop in the hopes no one will read the book.

Fiz hides the books about her evil ex from Hope while Tyrone distracts her in the hallway.

But a sulky Hope kicks open the door of the outhouse and is stunned to see a cardboard cutout of her real Dad and a stack of books.

How will Hope react following the shocking discovery?

Coronation Street airs on Mondays, Wednesdays and Fridays at 8pm on ITV.